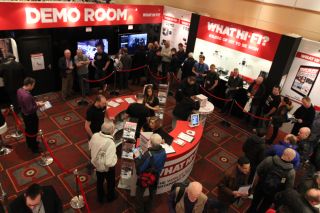 New products were on show from Cyrus, Q Acoustics, Quad and REL, amongst others, plus there was the chance to see and hear the latest and greatest kit from a whole host of other brands, from Devialet to Tannoy.

Below we've rounded-up pictures of the best sights and sounds from the Bristol Show (you'll have to take our word for it when it comes to the sound) .

Did you attend the show? Let us know your highlights in the comments box below.

VIDEO: The best new speakers from the Bristol Show

Audio Research unveiled the £900 AR M2 high-resolution audio player, which is due out towards the end of March.

Chord Electronics showed-off its new CPM 2800 MkII integrated amplifier. It takes the digital-to-analogue circuitry from the award-winning Hugo and teams it with 120 watts of power per channel. It's on sale for a cool £6690.

Qobuz announced that its CD-quality streaming service would be incorporated into the Devialet Phantom wireless speaker (pictured).

We were thrilled to have a Dolby Atmos system in our What Hi-Fi? demo room. We showed-off a Dolby Atmos system, complete with a £25,000 Focal Electra speaker package in a 5.2.4 set-up - that includes four speakers in the ceiling as well as the usual surrounds. Atmos clips were shown on Sony's flagship KD-85X9505 4K TV.

The Kudos room was dominated by the new Titan 808 floorstanders (pictured). These £20-25,000 behemoths are currently a prototype model and will replace the Titan 88. The speakers also support Linn's Exakt technology.

Something that we've seen before, but worthy of a mention nonetheless, is the Mass Fidelity Core wireless speaker system. This compact unit can be paired with several other products to create a multi-room speaker system.

We worked with Meridian to bring an exclusive demo of its new MQA file format technology to visitors to the What Hi-Fi? stand.

Modern British Audio was a new brand launching at the show. Falling under the umbrella of Sonic Concept, the new hi-fi brand has taken on the O'hEocha D1 range.

Paradigm's new Prestige range of speakers, due out in November.

PMC launched the Twenty sub at Bristol, which features the Advanced Transmission Line (ATL) bass principle, Class D amplification and "ultra-precise DSP control". It can be yours for £2950.

Q Acoustics officially unveiled its new 3000 series of loudspeakers at Bristol. The range consists of two standmounters, a pair of floorstanders, a subwoofer and a centre channel.

Quad's new Artera range of hi-fi components also made its debut. Pictured here is a CD player with a built-in pre-amp, and a matching power-amp. Each costs £1500.

Rega brought its new RX range of loudspeakers to Bristol. The range comprises the RX One bookshelf speakers and RX Three and RX Five floorstanders. They're expected to hit UK shelves this summer.

REL launched what can only be described as a massive subwoofer. The £2750 212SE delivers 1000 watts of power through two, 12in drivers and two, 12in passive radiators.

We heard of Tannoy's new Revolution XT range in January, but we finally got to see it in the flesh at Bristol.

Did you enter our competition to win £10,000 worth of AV kit? We will be announcing the winner soon... Don't worry, other competitions are also available.

Want to see more? Check out our Facebook picture album.