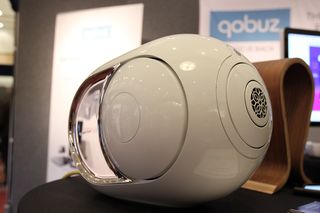 Qobuz, the French CD-quality music streaming service, has been incorporated into Devialet's latest wireless speaker, the Phantom, which is on display on the Qobuz stand. Visitors to Bristol can see and hear it in action.

Elsewhere around the show Qobuz is exhibiting alongside KEF, Bowers & Wilkins and Naim, and Benoit Rebus says the company is working closely with Sony, Astell & Kern and Cocktail Audio to integrate its CD-quality streaming service with those companies' products.

Qobuz also has a new app (v3.0) for Android and iOS devices, and has developed a mobile version of its website. The latter means that Android or Windows Mobile phone users can download music directly to their mobiles.

Intriguingly, Rebus says Qobuz has a "big announcement" planned for a press event in London on March 13th. Could it be that Qobuz will join is rivals in offering a high-resolution music streaming service? Might it adopt Meridian MQA?

Whatever happens, 2015 looks set to be a fascinating year for music streaming, with the likes of Deezer Elite, Tidal and Beats Music (now owned by Apple) all joining the market.