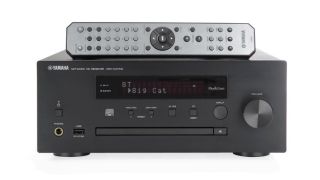 Black Friday has seen another price drop on Yamaha's CRX-N470D micro system, making it £150 cheaper than when we gave it a positive review a few years ago.

A true just-add-speakers hi-fi unit, the CRX-N470D comes with a built-in CD player and FM / DAB radio tuner as well as streaming capabilities via Bluetooth and Apple AirPlay.

It's online, too, with wi-fi opening the system up to Yamaha's MusicCast multi-room platform, as well as it being able to access Spotify, Napster, Juke and Qobuz, which are all built in as standard. The inclusion of vTuner also brings thousands of radio stations from across the globe.

Yamaha CRX-N470D system £199 at Sevenoaks
This mini hi-fi system is a nice mix of traditional and newer methods of playback. You can play your CDs and tune into the radio, stream songs over Bluetooth, AirPlay and wi-fi, and partner it with other Yamaha multi-room products. With the right pair of stereo speakers, it’s a tidy little performer.View Deal

"The Yamaha comes across as a tender, sympathetic performer," we wrote in our original review, having paired the CRX-N470D with a pair of Q Acoustics 3020 bookshelf speakers.

"The level of detail is satisfying. It's reassuring that the only diminutive aspect of the system is its physical stature."

You'll want to pair it with speakers that are capable of some snappy timing and subtle dynamics to make best use of the Yamaha's talents, but isn't that always the case?

If you're after an adept performer with an abundance of features, then you'll struggle to find a better deal than this right now.

Next you can head to our Black Friday speakers deals page to find something with which to pair it.