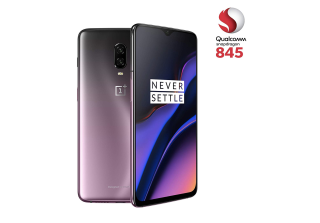 If you're looking for a stonking new smartphone for Black Friday, this is the best OnePlus 6T deal we've seen. And we're going to get on with giving all of the details to you, because at the time of going to press, the offer is only on for another nine hours and change – time is of the essence!

OnePlus 6T 8 GB RAM 128 GB UK SIM-free smartphone (purple) £399 at Amazon
A £130 saving on a OnePlus 6T smartphone. We loved the 7T, and there's plenty to like in the 6T aside from the 25% saving, including a 6.41-inch optic AMOLED screen, screen unlock tech and 128GB internal memory. It's listed at this rock-bottom price today, and today only – so if you really need a phone upgrade, get clicking.
View Deal

The 6T was launched in November last year, but the specs still hold up against many new issue smartphones. There's screen unlock (the in-screen fingerprint sensor) a 6.41-inch optic AMOLED screen boasting 2340 x 1080 resolution (or 402 pixels per inch) a 19.5:9 aspect ratio, a 20 megapixel dual main camera and 16 megapixel front camera and 128 GB of internal memory.

OnePlus recently launched the OnePlus 7T  which we awarded five stars to, so you know it comes from good stock, too. And where that model will still set you back over £500, it's sibling is less than £400 – today and today only.

We've not been the full 12 rounds with the 6T, but OnePlus states that you'll get a day’s power in half an hour – more than can be said for many smartphones currently on the market. If it's a new phone you need, this could be the Black Friday steal for you.