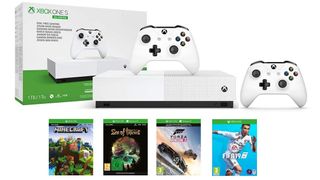 Amazon is tempting gaming fans to spend what's set to be a scorching summer (by UK standards) indoors by heavily reducing an Xbox console bundle by 46 per cent for Prime Day.

Xbox One S 1TB All Digital console + games bundle £170
Gamers can get money off the console, plus an extra controller and access to several games with this superb £145-off Prime Day deal. View Deal

The disc-free console itself retails for around £200, so you're not only making a saving but also getting game downloads and an extra controller chucked in for free.

This latest Xbox by Microsoft can only play games that are downloaded or streamed from the internet, as there is no disc slot. That means it loses 4K Blu-ray support, so it may not be high on the list of those with big Blu-ray collections.

However, it can still play films in 4K Ultra HD if they are streamed or downloaded. The new Xbox also supports HDR and Dolby Atmos, so you should still be in for quite a viewing experience.