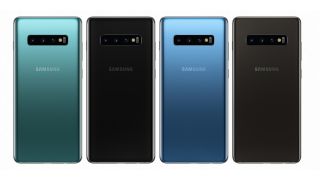 Those in the market for a top end Samsung Galaxy smartphone had best get their credit cards out.

The Galaxy S10 is now sitting at $600 in any of the four colour choices. Those happy to walk around with the larger (and five-star) Samsung Galaxy S10+ in Flamingo Pink, Prism White or Prism Blue only need pay $700. Both prices are $100 less than previously advertised.

Top-of-the-line Samsung Galaxy mobile with all the mod-cons; this 128GB version includes a 6.4in edge display, a fingerprint sensor, facial recognition and a huge all-day battery. A five-star phone, the AMOLED display is bright and colourful and the audio full of detail.View Deal

It's just a shade off premium compared to the S10+ but still has the same, if smaller, superb screen. The audio delivery is solid too and the rear camera array identical to the S10+ as well. There's still 8GB RAM and a very decent battery. A very reasonable price for a very good phone.View Deal

These are the latest phones in the all-conquering Galaxy range. They include HDR10+ support, an updated "Infinity-O" screen, Dolby Atmos support and even 3.5mm jacks (phew!) for plugging your headphones in direct.

Both phones feature Samsung's Quad HD+ Dynamic AMOLED screen, with the S10 toting a 6.1in size while the S10+ has a 6.4in display.

Differences between the two include the addition of the 8MP portrait lens on the front of the S10+ and a larger 4,100mAh battery on the S10+ too. Take a look at our Samsung Galaxy 10+ review for more details.