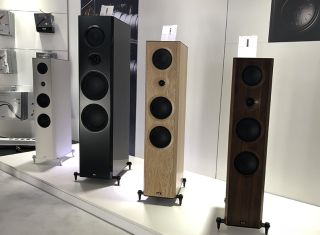 High-end brand T+A is celebrating its 40th birthday with a new line-up of Criterion CTL loudspeakers and M 40 HV mono power amplifier, both unveiled at the Munich High End Show 2018.

Consisting of three floorstanders, the S 2200 CTL, S 2100 CTL and S 2000 CTL, the newly developed range is designed to be more compact, yet more powerful and capable, than its predecessors.

The main difference between the three models is size: the S 2200 is the top model with the tallest cabinet and largest drivers (22cm), the S 2100 sits in the middle at a metre high, while at 95cm tall, the S 2000 is the smallest and slimmest of the line-up.

Meanwhile, the M 40 HV power amp is designed to meet the 'highest audiophile demands'. Built with high-quality components, all amplifier stages of the M 40 HV are designed to operate in a purely linear fashion to minimise unwanted distortion.

The input stage uses valve amplification and the output stage is duplicated – each of these output amplifiers is capable of delivering up to 1000W, and is connected to a pair of speaker terminals. This way you can either wire the amp in a parallel manner (to maximise the power output) or in a bi-amp configuration (where separate signals are fed to the bass and midrange/high frequencies).

Prices are yet to be confirmed, but this is the High End Show - so expect some rather hefty price tags.