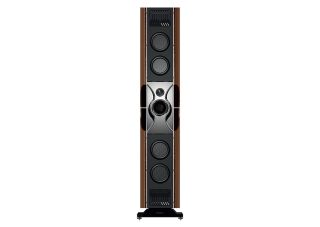 When a speaker company gives its latest flagship the tagline "the loudspeaker you will never hear", it could either be an extravagant prototype or so eye-wateringly expensive they daren't play it in front of mere mortals.

But this is PMC, and the "not hearing" part is meant to be taken literally: this flagship speaker has been designed with the main aim of removing all unwanted distortion and colouration introduced by the speaker itself, so all you hear is the music.

After five years in the making, the Fact Fenestria has been launched at the Munich High End Show 2018. It features a newly designed cabinet that takes inspiration from the way skyscrapers are built to withstand earthquakes.

The 1.7m-tall cabinet's side panels are engineered to vibrate in opposition to the rest of the speaker assembly, cancelling out any vibrations introduced by the main cabinet and driver units. The cabinet is also heavily braced and acoustically isolated from the six drivers.

The three-way speaker features a 19.5mm soft-dome tweeter and a 7.5cm midrange unit, both of which are housed in an aluminium 'nest' that keeps them further acoustically isolated and decoupled from the rest of the cabinet. It also prevents the four long-throw carbon fibre 16.5cm bass drivers interfering with the mid-to-high frequency performance.

The tweeter is further encased in a silicone-damped suspension mount (Auriole) to keep it isolated from the midrange driver.

And it wouldn't be a PMC speaker without the use of its proprietary transmission line bass-loading tech and Laminair vent (seen in the Twenty5 series), both of which are designed to improve the speakers' bass performance.

The Fact Fenestria comes in white silk, rich walnut, graphite or tiger ebony finishes, and will be available from September. The price is £45,000 per pair.