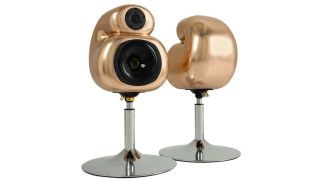 They say you can't put a price on happiness - but if we had all the money in the world to spend on our hi-fi set up, we reckon we'd be pretty content.

We decided to do a little bit of detective work to find the most expensive speakers ever made - and we've been blown away by some of the price tags. The majority of the items on this list would be beyond the reach of most customers, but there's no harm in ogling some gigantic shiny speakers with crazy tech inside them.

Indulgent? Perhaps. Extravagant? No doubt. Expensive? You bet. So here's what we found in ascending order of outlay...

A striking 800kg speaker we first spotted at the 2013 Munich High End Show, Final Audio is a Japanese company founded, owned and run by Kanemori Takai from 1972 until his death, sadly, just one year after the launch of the Opus 204.

Takai believed that to truly get the best out of these speakers, they needed to be installed in a house before it was finished and then have the building constructed to fit around them. Now that's putting hi-fi first.

These speakers use sand-filled, ultra-thin aluminium cones which weigh a featherlight 8g each.

CAT says its MBX systems have been known to top $16m! Custom-built, these 3.6m speakers weigh five tonnes each and house 55cm subwoofers, 23cm woofers, 14cm mid-range speakers, and 3cm tweeters. We also understand the enclosures are more than 20cm thick and are built using CAT's own secret lamination process.

If you fancy ordering some yourself, head over to California Audio Technology and make your choices. Material options include HDF, Corian, Avonite, MBX105, marble, granite, concrete, aluminum, stainless steel and titanium. You can have up to 10 drivers per channel. Expect to pay somewhere between $500,000 to $16,000,000 and don't forget to tell them that What Hi-Fi? sent you.

Is it a speaker? Is it a refrigerator? We're still hovering around the half-a-million dollars mark with these towering Backes & Müller BM 100s, which will need a bit of space given their height of 230cm. One of the most impressive features is the large mid-range horn that measures 2.3m high and has a front area spanning 1.75 sqm.

Bass jets frame the entire loudspeaker and help to create a wall of sound with up to 10m long bass waves distributed over the entire height of the loudspeaker. Sounds puny, really.

With a listed retail price of $520,000 a pair, the Signature Titan II is a limited edition speaker described by Moon Audio as the first in a series of "ultra-limited edition functional acoustic art works". Each pair has been signed by the designer, and its limited-edition tag is not to be taken lightly: one pair reportedly went for $2m.

Each speaker is, of course, hand-made. They stand at 1.83m and weigh over 1.2 tonnes. The cabinet is made mostly of aircraft grade aluminium and white steel, and houses two subwoofers, two midrange drivers and a single tweeter which range up to an ultrasonic 90kHz. Oh, and just in case you're checking for compatibility, you can bi-wire them.

With the Wisdom Audio Infinite Wisdom Grande we're starting to really move up the price ladder. And these are large units, weighing in at a total of nearly two tonnes - designed, says Wisdom Audio, for "multi-level rooms in the largest homes and palaces, great halls and ballrooms" no less.

There are separate cabinets for the mid/treble units and for the bass. The latter of those are 243cm tall and house an incredible 24 x 30cm woofers. The former stacks six 7.5cm x 190cm Quasi-Ribbon/Planar-Magnetic units into its 4m frame. Altogether the claim is that they can muster sound pressure levels in excess of 120 dB.

At $600,000 a pair, the Magico Ultimate IIIs stand around 230cm tall and are an all-aluminium, five-way horn-loaded system. They reportedly require 10 amplifiers, with technical aspects including the throat of each horn that features a high-sensitivity compression driver among the highlights.

Alongside those CNC-milled horns are six ALE compression drivers and four custom-made mid/bass and bass drivers, split by an active DSP-controlled crossover. They come in at about half a tonne each and require an 18-month lead time. Be sure to factor both of those in when you place your order.

WAMM stands for Wilson Audio Modular Monitor and yes, you've guessed it, these Master Chronosonics are multi-module loudspeakers. Each module's time alignment can be adjusted in five-microsecond increments. Align the drivers correctly to the listening position, contends Wilson Audio, and the result is far more lifelike sound.

Each speaker is over 210cm tall, constructed out of aerospace-grade aluminium, and its open architecture is designed to minimise stored energy. Each pair takes about 10 weeks to make, so we're not surprised Wilson Audio is only producing 70 pairs. Looking for something more affordable? Try the $330,000 Chronsonic XVX instead.

Horn speaker specialist Cessaro Horn Acoustics has a top of the range model which is 2.8m tall and weights 4.5 tonnes. Just in case you were wondering, The Omega I system is not meant for normal living rooms, according to the website. You haven't got one of those, have you?

Six 40cm bass units drive the front-loaded horns which, you'll be pleased to hear, can be ordered in any colour you choose. Equally, the cabinets and side panels come in a pretty extensive range of veneers. African Padauk, anybody?

The Dutch high-end audio manufacturer's Exquisite Extreme Grand Limited Edition 25 might seem expensive enough at a reported £318k a pair, but the Grand Enigma soars higher than that. A one-off, this system was said to have been designed in a huge cellar in Belgium and with a dollar price tag with six zeros on the end.

As such, there's no further information on them and, veiled as they were when this photo was snapped, there's not an awful one can glean. Enigmatic indeed.

Moon Audio makes a second appearance on this list with an even more ostentatious speaker than the first. Just 10 pairs were produced at a cost of $1.1m, with the ominous-sounding Dark Star on board.

The company claims it offers "an optional second way of experiencing music, which is independent of the drivers in the speaker itself and delivers music into the listener's brain, bypassing the ears". How it works, we don't know - but we're confident ears won't be rendered obsolete just yet.

Transmission Audio is proud of the Ultimate. If you wanted to compare it to sports cars, the manufacturer says, you'd have to "combine the specifications of Ferrari, Mazerati and Koenigsegg in one chassis".

Little surprise it stands more than 2.1m tall, then...

Rub your eyes as much as you wish, but that won't change the fact the price you see for this pair of stunning speakers is a cool $5m. If we owned them, we'd almost be scared to use the speakers for their intended purpose out of fear that we might do some damage.

So what makes this such an expensive pair of speakers? It's just a hunch, but we reckon it has something to do with the 76cm cabinet that has been cast in 24-carat gold...