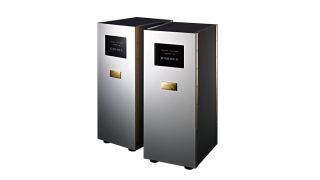 How much would you pay for an amplifier? £500 / $500? A grand or two, even, if your system warrants it? Several of the market's budget stereo amplifiers show that you can get a lovely performer for not much outlay - so you don't have to spend big to get plenty out of your system.

But if you do want to splash out, you've come to the right place. These are the most expensive amps ever made, with one model around £2m / $2m - roughly 10,000 times more expensive than the cheapest amp we'd recommend someone (the Onkyo A-9010).

Don't worry if your budget doesn't stretch that far, we've selected an amp that can be yours for just a couple of hundred thousand. Bargain.

Italian designer Andrea Pivetta's ludicrous 120,000-watt (yes you read that correctly) amp stands a whopping 2.4m tall and weighs a colossal 1.5 tonnes - that's as much as a caravan. Though this is sure to give you much better sound.

When powered on, the 12-sided, aircraft aluminium prism opens up in seven distinct sections to reveal all the electronics, as pictured above. Madness.

Yes, Pivetta is at it again. Though this model is a mere 1.8m tall, only weighs a tonne and delivers a paltry 14,400 watts of power. (Heh.) Hence the 'knock-down' price. The Opera One from 1998 was actually the first amplifier completely handmade by Andrea Pivetta, laying the foundations for the beast above. To that end, it also has a cylindrical stricture that unfurls once powered on.

The Otello packs six transformers with adjustable polarisation, meaning zero feedback. Three engineers spent five years working on the amplifier, which was completely hand-wired and is housed in a cabinet made entirely from solid walnut wood. Even if Ultrasound sold just one, it would have been worth it.

Renowned purveyor of audiophile capacitors, German company Rike Audio has also made a handful of high-end products, one of which is the Edzard monoblock amplifier. The modular four-piece, 50-watt Class A amp weighs a total of 200kg. And as you might expect, the performance is suitably heavyweight.

Now that you've clocked the Abbssolute Intuition above, it shouldn't surprise you that the vacuum tubes it uses, the GM100s, are the biggest ever made for an audio product. This amp weighs a whopping 398kg and packs and is completely handmade. Which makes it too important for the correct spelling of 'Absolute'.

Ultrasound moved on the distortion-free technology it introduced on the Otello above in the Parsec. Here, the signal only crosses three components - which Ultrasound claims produces unparalleled transparency, speed and harmonic structure. Weighing 70kg, it's a relative lightweight in the world of insanely pricey stereo amplifiers.

Five thousand watts? That's not the only insane stat about this amp - it stands nearly one metre tall, is powered by sixteen separate transformers, has a noise rating of 0.0005 per cent and a frequency response that runs up to 300,000Hz. Which is more than any sane person could ever need. Which is exactly why we love it.

Direct-heated triodes combine with single-ended, class-A tube monoblock power to make this amp an absolute beast. The Japanese audio brand threw everything it had into this special 10th anniversary model, redesigning an all-new, highly isolated power circuit and housing every innovative element into a 60mm solid aluminium chassis, finished in gold champagne of course.

There's also a budget version that costs a mere $70,000, in case you're a bit strapped for cash this month.

Created in 1989 - like Taylor Swift - this uses pure silver for its transformer – one of the most important aspects in keeping the graceful and dignity sound of the 211 power tubes, says Audio Note – as well as for its conductors and capacitors. But if you listen to Taylor Swift through it, it's wasted on you.

FM Acoustics has some pedigree. Its units are handmade in Switzerland, with an attention to detail - and price - that rivals Swiss watchmakers.

11 of the world’s most expensive pairs of headphones