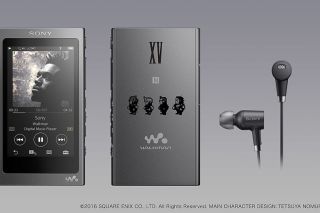 The Walkman A-Series Final Fantasy XV Edition, which was spotted by the Verge, features "special icons" in its software that you won't find on the bog-standard A-Series model. It also has a big 'XV' legend on the back, as well as Final Fantasy characters rendered in pixel art.

Like the Walkman, they will be nigh-on identical to their non-videogame-themed namesakes - which is no bad thing, though the headphones got a three-star rating in our review, while Sony's recent Bluetooth speakers fared slightly better.