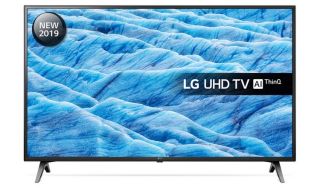 Argos' Black Friday blow-out has kicked off with some of the cheapest TV deals around. This 2019 LG 60-inch 4K HDR TV is now available for just £429, which Argos says is its 'lowest price ever'.

Given that Argos was selling this model - the 60UM7100PLB – for £599 a couple of months ago, that sounds about right. The huge price drop on this LED set means you can get a big-screen bargain with a quad-core processor, voice controls and True Colour Accuracy picture tech for less money than many a 50-inch set.

LG 60-inch 60UM7100 4K HDR TV £429 at Argos
A 60-inch 2019 LG TV for a little over £400? It's a bargain, even for an LED set. You get a quad-core processor, AI voice controls, LG's brilliant webOS platform and plenty of support for all your favourite streaming apps. It might be a budget set, but this model is now a class-leader when it comes to value for money.View Deal

This 2019 model is one of LG's more affordable TVs, with an LED panel rather than OLED. But at £429, it's now superb value for money.

LG's picture processing technology is some of the best in the business, so you can expect decent performance for the money, as well as HDR, HDR 10 and HLG support.

You get plenty of smarts, too. LG's webOS platform is simple and fast, offering access to a wealth of streaming apps such as Netflix. You even get voice controls, so you can ditch the remote and ask your TV to change sources via voice commands.

All these features for a little over £400, crammed into a 60-inch panel, should help you make the most of those packed Christmas TV schedules.