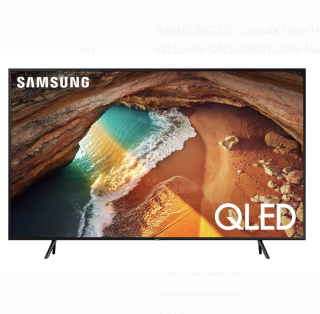 If you're not yet aware of the mega, impending deals feast known as Black Friday, where have you been? Anyway, you're here now – and good thing too, for the pre-Black Friday deals don't get much more impressive than this one, courtesy of Walmart.

It's a 2019 55-inch 4K Samsung QLED TV for just $698, following a massive $480 saving. While it may belong to one of the brand's lower-end 2019 QLED ranges, the Q60 Series, we can heartily vouch for Samsung's OLED-rivalling QLED technology. After all, the QE65Q70R that sits above it in the line-up recently won a What Hi-Fi? Award!

If you need to upgrade your TV and want a premium set (but perhaps can't stretch to typically pricier OLED sets), this QLED TV looks to be a great shout thanks to its hefty discount. You know what to do.

Samsung 55in QN55Q60R (2019) $698 at Walmart
This Samsung has a serious $502 saving right now. You'll get QLED performance, as well as access to Netflix, HBO NOW, Hulu, CBS, VUDU, Google Play Movies/TV, YouTube. Bixby voice assistant is also built-in, and a 240Hz refresh rate is good news for gamers. We don't think this one will be around for long...

Need some specs? Allow us: alongside that 4K HDR QLED display you'll get Netflix, HBO NOW, Hulu, CBS, VUDU, Google Play Movies plus TV and YouTube apps, plus Bixby voice assistant built-in. It's also furnished with four HDMI ports for any extra sources you want to plug in, like, say, a Amazon Fire Stick 4K. A 240Hz refresh rate should make it a great option for gamers, too.

The direct LED backlight available across most of Samsung's QLED range is replaced here with an edge LED backlight, which will inevitably result in a small loss of contrast and local dimming. But on the plus side a quick scan of the reviews on Walmart's site proves resoundingly positive. And at this price, it's a real steal.