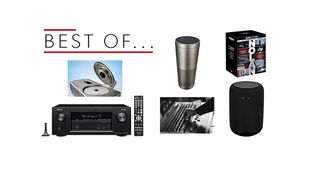 This week, Denon and Marantz's AV receivers became the first to support DTS Virtual:X technology, Warner Bros announced a collection of Christopher Nolan films in 4K and the entirety of ECM Record's library has been made available on the major streaming services.

MORE: Great savings on a Christmas gift subscription to What Hi-Fi?

DTS's virtually surround sound technology is set to be integrated into home cinema amplifiers for the first time.

DTS Virtual:X is a way of getting three-dimensional sound without extra speakers, by creating the effect of 7.1.4 surround through a 5.1 or stereo channel set-up.

A number of Denon and Marantz's AV receivers are set to be the first amps to include it, with the rollout set to start now and continue until Spring 2018.

Christopher Nolan's films are set to make the jump from HD into 4K, with Warner Bros's announcement of several films hitting the format later this year.

Titles include The Dark Knight Trilogy, The Prestige, Inception, Interstellar and Dunkirk (which had already been announced on the format).

These films will take advantage of HDR and Wide Colour Gamut (WCG), though expect them to carry over the theatrical 5.1 and 7.1 audio mixes.

The entirety of ECM's (Edition of Contemporary Music) library has been made available to subscribers of the major streaming services.

The library includes artists such as Keith Jarret, Avro Part and Meredith Monk. The reason behind ECM's decision was down to the unauthorised sharing of its artists' recordings via video-sharing and piracy sites.

Alexa voice control for Spotify arrives on Sonos One

Black Friday deals: Save up to 50% on Samsung TVs

Get three months of Spotify Premium for 99p!

Amazon Black Friday deal: save £30 on Echo Plus

The best Black Friday PS4 and Xbox One deals

Chord's Blu MkII is not just one of the finest, but the finest CD transport we've heard.

It delivers the most informative and enjoyable sound we've heard from from the CD format, with exceptional insight and dynamics.

Pair it with Chord's own DAVE DAC and we doubt you'll hear a finer combination.

Not to be confused with the Echo 2, the Echo Plus is the most feature-laden of Amazon's smart speakers.

But we're more interested in its sound – and while it has a clear midrange and smooth treble, it won't beat other similarly-priced dedicated speakers.

As a smart hub it's fantastic, as a wireless speaker it's merely a good one.

Sony's LF-S50G is a smart speaker that comes with the promise of high-quality audio.

However, it lacks in confidence and features some unwelcome sibilance at volume.

As a smart speaker, the integration of Google Assistant is welcome, but the speaker's sound makes for a tiring experience.