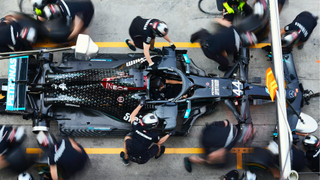 Those in the UK will need to subscribe to Sky to watch the Tuscan Grand Prix live. F1 fans in the US can stream every race live for just $79.99 per year via F1 TV Pro (don't forget, you'll need a VPN to access your account when outside of the US).

The Formula 1 Pirelli Gran Premio Della Toscana Ferrari 1000 – better known as the Tuscan Grand Prix – will be Ferrari's 1000th championship race. It's also the second of three 2020 F1 races set to be held in Italy, and the first ever F1 race to be held at the Mugello circuit.

The Tuscan Grand Prix starts at 2.10pm today – but tune into all the pre-race build up from around 12.30pm. In a boost for the sport, 2880 socially-distanced fans will be allowed into the circuit to watch the inaugural Mugello grand prix.

Last week saw the legendary Monza circuit play host of one of the most remarkable F1 races in living memory. Pierre Gasly stole a stunning victory for Alpha Tauri after Lewis Hamilton took a 10 second penalty for entering a closed pit lane.

McLaren's Carlos Sainz chased down Gasly in the closing laps of the race but couldn't quite catch the Frenchman and took a bittersweet second place. Racing Point's Lance Stroll came home in third, having blown his chances of winning with a poor restart that saw his car swamped by Gasly and Sainz.

Having re-entered the race in last place, Hamilton fought back to an impressive seventh – just two places behind team-mate and championship rival Valtteri Bottas. Hamilton's damage limitation means the six-time world champion starts the Tuscan Grand Prix on 164 points, 47 points ahead of Bottas in the race for the 2020 F1 World Championship. Red Bull's Max Verstappen drops to third with 110 points.

So after the madness of Monza, what can we expect from today's race? No preview of the Tuscan Grand Prix would be complete without talk of embarrassment for Ferrari at their 1000th race. The Italian team are sporting a one-off dark red livery this weekend in honour of their very first appearance in F1 way back in 1950, but recent history has not been kind to Vettel, Leclerc or team boss Mattia Binotto – can they extract enough performance from the car to avoid a repeat of last weekend's disastrous double-DNF?

In other F1 news, four-time world champion Sebastien Vettel has signed up to the new Aston Martin team for 2021 and beyond. Vettel will replace Sergio Perez who leaves the team currently known as Racing Point at the end of this season.

"It's a new adventure for me with a truly legendary car company," said Vettel.

"Extreme E really appealed to me because of its environmental focus," Hamilton said. "Every single one of us has the power to make a difference." The F1 great won't be behind the wheel, though. Each race will be driven by male and female racing drivers, said to include the likes of Billy Monger and Jamie Chadwick.

We'll look at the TV and live stream options for UK and USA-based F1 fans below, but even after spending all that money on a subscription you're still not going to be able to watch the Grand Prix from another country. The service will know your location based on your IP address, and will automatically block your access.

Anywhere else and you might want to get yourself a VPN instead. A VPN (Virtual Private Network) creates a private connection between your device and the internet, such that the servers and services you’re accessing aren’t aware of what you’re doing. All the information passing back and forth is entirely encrypted.

Watch the Tuscan Grand Prix live in the UK

That comes bundled in with all the other sports channels as part of the £18 per month Sky Sports pack or you can get Sky Sports F1 on its own for £10 per month but on a rolling contract.

Watch the Tuscan Grand Prix live in the USA

ESPN will carry live coverage of every session to subscribing US fans. Practice sessions will be available on ESPN2, with qualifying and the race broadcast on the main ESPN channel.

You can get instant access to ESPN and some good deals here.

Live streaming is available via the ESPN App, which is available on Android phones and tablets, iPhones, iPads, Fire Tablets, Apple TV, Android TV, Chromecast, Fire TV, and Roku. You'll need to sign up to ESPN first, though.