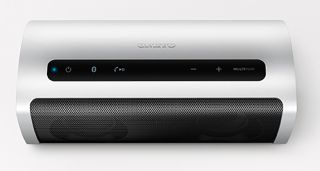 Onkyo has taken the wraps off five brand-new wireless, portable speakers at IFA 2015 in Berlin.

Joining the X9 hi-res audio speaker, which was revealed by Onkyo last week, are the X6 and X3 Bluetooth speakers, and the T3 and T1 wireless portable speakers.

The €180 X3 is the X9's little brother, and priced to reflect its more pragmatic spec. The X3's silver or black cabinet houses two 4.5cm mid/bass drivers and two passive radiators. It has the same Bluetooth, USB and analogue connectivity plus integrated mic as the X9, but battery life is closer to eight hours and amplification is 2x5W.

Between those two sits the €200 X6 (pictured at top). It's packing Bluetooth, USB and analogue inputs along with a built-in mic, naturally, and features two 4.5cm mid/bass drivers and two passive radiators amplified by 2x6W of power.

Multipairing technology means it can pair with up to four Bluetooth devices at a time - ideal for falling out with your nearest and dearest.

Rounding off the range are the T3 and T1 'travel' speakers. These are both uber-portable designs, just 2.3cm thick and weighing only 250g, and are equipped with two 3.6cm full-range drivers and a sigle passive radiator.

Both have an integrated battery that's good for eight hours of playback from a single charge, both are powered by 2x4W of amplification and both are available in black or white. What sets the T3 (€150) apart from the T1 (€120) is its USB output (which allows it to charge other USB-equipped devices) and the option of a rose-gold finish.