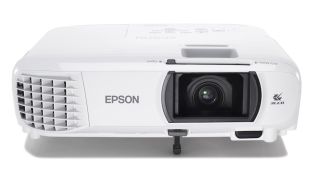 Even at £550, this Epson EH-TW650 projector was ‘pretty faultless for its price tag’ - as we said in our recent review of it. Considering it's since dropped to almost half that price, we aren't sure of a superlative worthy enough to describe its value now.

Missed the deal? Check out all the Black Friday projector deals.

Epson EH-TW650 projector £289 at Amazon Today only, Amazon is offering 33% off this Full HD projector, which we recently awarded five stars to for its crisp, clear picture and realistic colour production. Not bothered about 4K? This is a fantastic buy.View Deal

Not bothered about (or don't have the funds for) 4K projection? This Full HD Epson projector is a no brainer. It's easy to set up, delivers an insightful picture across the board, and is a good upscaler of DVDs.

If you’re ready to make the switch from a TV to an entry-level projector, and want a competent bargain to play Full HD and SD material, it's a fine choice.