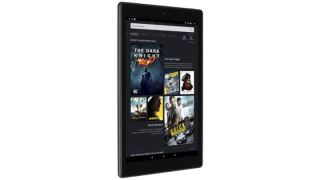 Looking for an early Christmas present? There's a huge saving to be made on a five-star Amazon tablet but you'll need to be quick.

Amazon has slashed 31 percent off its Amazon Fire HD 10 tablet and you've got until the end of the day to take advantage.

It's the 7th generation of the device, which picked up a What Hi-Fi? Award in 2018 for the best tablet under £200. Amazon has recently launched an 8th generation version, but the differences are minimal.

Amazon Fire HD 10 tablet £109.99
This five-star tablet offers a lot of screen for the money and puts in a strong audio and video performance. If you're up for being fully immersed in Amazon's eco-system, it's a seriously tempting offer.View Deal

Like the name suggests, it's a 10.1in tablet with a 1080p screen and 32GB of internal storage, expandable up to 256GB. There's Dolby Atmos processing, dual-stereo speakers and the physical design is virtually identical to the new model.

The 7th Gen tablet has 10 hours of battery life and a quad-core processor compared to the 8th generation's 12 hours, and octa-core processor.

The newer model also benefits from a slightly better front-facing camera (2MP versus VGA) and uses USB-C for charging instead of micro USB.

But if you want an affordable tablet that does all the basics extremely well, the 7th Gen model is still an excellent piece of kit for the money. Grab it while you can.