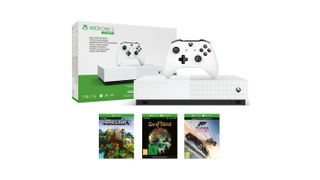 Looking to score a deal on a cheap Black Friday Xbox One deal? How about one that gets you one for just £129, and that chucks in some games for that super-low price too?

In honour of Black Friday, you can now get the Xbox One S 1TB All Digital Edition plus three game downloads for £129 – that's £70 off its RRP.

Microsoft Xbox One S 1TB All Digital Edition Bundle £129
This is the best Black Friday gaming deal we've spotted: an Xbox One S console with 1TB of storage plus a bundle of three digital games (two of which are smash hits) and a wireless controller.View Deal

As well as the download codes for the games, you get the 1TB Xbox One S All-Digital Edition console.

The One S might not the the top-of-the-range Xbox – that honour currently goes to the much pricier One X – but this £99 bundle has to be the best-value Xbox deal we've seen. Well worth getting your hands (or indeed thumbs) on.

More of a PlayStation fan? Then you should definitely check out these Black Friday PS4 deals.