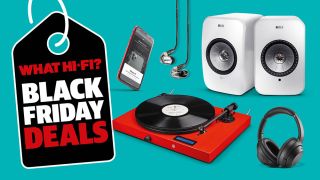 As one of the biggest names in consumer technology, Sony's Black Friday deals will likely appeal to you – particularly if you're on the hunt for a boxfresh Bluetooth speaker.

Amazon has slashed the price of a slew of Sony party speakers, including the waterproof, wireless Extra Bass models with a sonic presentation that's supposedly suited to al fresco gatherings.

The waterproof SRS-XB41, for example, has dropped from £149 to £99, meaning you can pocket £50 saving. It features dual 58mm drivers and light-up panels that can be customised to flash to the beat of the music via Sony's Fiestable app. Battery life is a healthy 24 hours and it can charge your phone.

If you want to add a bit more oopmh to proceedings, the hefty (7kg) Sony GTK-XB5B might be just the ticket. It features Extra Bass, 'club-like' strobe lighting effects and wireless streaming over Bluetooth. More pertinently, the Black Friday sale price is £112.49 (that's practically half the original £220 RRP).

While the funky features might not be everyone's cup of tea, the deals, which are available now, are pretty eye-catching. Especially if you're planning a Christmas knees-up. Click the links below to start shopping...

Sony SRS-XB41 Bluetooth speaker £99 at Amazon
Sony's midrange waterproof party speaker is a riot of colour thanks to built-in lights that can be customised to suit the mood of the gathering. Sony's Extra Bass technology should ensure a decent low-end punch too. Cheap, cheerful and sonically capable.View Deal

Sony GTK-XB5 Bluetooth speaker £112.49 at Amazon
This weighty party speaker promises to create a 'club-like atmosphere', with strobe lighting effects and rumbling basslines. The Clear Audio+ tech adjusts the sound settings to make the most of a pumping EDM track. There's also NFC and Bluetooth for pairing with smart devices. A bargain for those who want to have it large.View Deal

Searching for a speaker that's easy to carry, waterproof and boasts a marathon 24 hours battery life? The SRS-XB31 will oblige. You also get Sony's novelty Party Booster function: tap the side and the device emits percussive sounds. Never has 'bang for buck' been taken quite so literally.View Deal

Sony SRS-XB32 Bluetooth speaker £87.20 at Amazon
Whatever your Bluetooth portable listening desires, this budget waterproof speaker has you covered with Extra Bass, 24 hours battery life, the obligatory multi-coloured party lights and the option to charge up USB devices on the go. Now with a 20% saving.View Deal