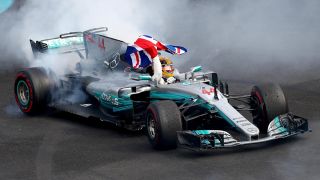 Even with Mercedes' Lewis Hamilton tying up the 2018 championship title, there's been no shortage of drama on and off the track.

This 2018 Formula 1 season has been a tightly contested one throughout, with Ferrari's Sebastian Vettel and Hamilton practically swapping championship leads race-by-race.

There's been plenty of newsworthy action happening off the track, too: Fernando Alonso announced his retirement from F1, Red Bull's Daniel Ricciardo surprisingly signed with Renault for 2019, and Kimi Raikkonen (who finally nabbed a race win at the US GP - his first since 2013) is leaving Ferrari to move to Sauber in 2019.

It's proven to be an unpredictable and enjoyable run of F1 racing. So whether you're looking to catch the races and trackside action on your new 4K TV, listen on the radio or watch online, read on…

The broadcast rights to F1 are shared between Sky and Channel 4. The former has rights to all 21 live races, while Channel 4 has to contend with just 10 live races and highlights of every other grand prix.

With the summer break over, Channel 4 picks up its F1 slate with the Belgian GP, before showing the Singapore, Japanese, United States Grands Prix before the channel's coverage culminates with the Abu Dhabi season finale in November.

Other than the British GP, which is contracted as a free-to-air race, the finale will mark the last race shown on terrestrial TV as Sky's period of exclusivity means the sport will disappear behind a paywall from 2019 to 2024.

Steve Jones hosts and alongside him are 13-times race winner David Coulthard, technical analyst Karun Chandhok and pitlane reporter Lee McKenzie. Special guests will see Mark Webber, Susie Wolff and the inimitable Eddie Jordan pop by during the course of the race season. All races are broadcast without advertising breaks.

Sky has the rights to all the races through its dedicated F1 channel: Sky Sports F1. Its coverage is headed by ex-racer Martin Brundle and former world champion Damon Hill. Alongside them are Johnny Herbert, Paul di Resta and Anthony Davidson. Sky customers can get the channel on top of their existing subscription for £18 per month.

Sky customers who own the Sky Soundbox (£250 or £750 for non-Sky customers), can boost their flatscreen TV's sound when paired with the Sky Q box. The Soundbox features exclusive sound modes that automatically refine audio for the Sky Sports F1 channel.

The broadcaster's free-to-air channel, Sky Sports Mix, will also feature a few live races. The British Grand Prix is a free-to-air event and will be joined by two other 'prime time' races.

F1 races start at 10 minutes past the hour. Times stated are for the UK.

If you want to watch F1 races in 4K, your only option is Sky.

The Sky Sports F1 broadcasts each practice, qualifying session and race in Ultra HD resolution, and the only way to get 4K is to purchase the Sky Q 2TB set-top box (the 1TB does not output in 4K).

HDR support is coming in 2019, so for now you'll be watching in plain old 4K (captured at 50fps). Hybrid Log Gamma (HLG) was originally expected to arrive this year, but Sky has instead decided to roll it out for next year.

Watch Formula 1 online, on mobile and in VR

Liberty Media, the owner of F1, developed its own streaming service for 2018 in F1 TV Pro. However, the service is not available in the UK due to the stipulations of its contract with Sky and we can't imagine that situation will change until Sky's exclusivity ends with the 2024 season.

You can still access F1 TV Access, the platform's catch-up on-demand service. You can watch race highlights for £2.29 per month or £19.99 for the entire year. Also part of the package is live timing information, full race replays and historic race archives.

F1 also has its own official YouTube channel featuring bite-size highlights of every session across a GP weekend, as well as archival footage, behind the scenes action and interviews with prominent members of the F1 paddock. Simulcasts of events – such as last year's London Live in Trafalgar Square – will be shown on the channel too.

For its ten races, Channel 4 has live broadcast rights to practice sessions, qualifying and full races – all of which can be streamed on its All 4 catch-up and on-demand platform. Get the free All 4 app and you can download the content on various mobile devices. Like BBC iPlayer, programmes stay on the service for 30 days.

Alternatively, there's Sky Go (free to Sky customers), which allows streaming across a range of compatible Android, iOS and Kindle Fire devices. For another £5 you can get Sky Go Extra, which allows downloads.

For those onboard with Virtual Reality, Sky has developed its own VR app which features a range of immersive experiences for F1 fans. These included exclusive behind-the-scenes access to the McLaren and Mercedes teams at pre-season tests in Barcelona. The VR experience can be enjoyed without a headset, but either Google Cardboard, Samsung Gear VR or Occulus Rift is preferable.

Android smartphones running Lollipop 5.0 (and above) or iPhones with iOS 8 (or more) can be used. The mobile devices will also need to be compatible with whatever headset you intend to use.

If you have no interest in a Sky contract, you can opt instead for Now TV. Available across a range of devices, purchasing Day, Week or Month passes will allow viewers to dip in and out of Sky's sporting line-up at their leisure. It's available on a number of platforms including Android, iOS, Xbox and PS4.

When and where can you watch Formula 1 highlights?

Both Channel 4 and Sky have highlight packages to go with their broadcasts.

Highlights appear on Channel 4 several hours after the qualifying/race has taken place (morning races tend to appear in the afternoon, afternoon races in the evening and evening races at night), followed by an appearance on Channel 4's on-demand service.

On Sky you can watch videos and highlights on the Sky Sports website, although these tend to be skewed to a more news and promotional angle.

For actual F1 highlights, you'll need access to Sky Sports F1 or Sky Sports Mix, which will show highlights of qualifying and the race after each event.

And as we mentioned earlier, you can view race highlights on F1 TV Access for a monthly or yearly fee.

Listen to Formula 1 on radio

Despite ending its TV contract early in 2015, the BBC continued with its radio coverage, with BBC Five Live extending its deal to 2021.

You can listen to races on your radio or the internet, or you can catch the action on your tablet, smartphone or smart device using the BBC iPlayer Radio app (UK only).

If you're a fan of podcasts, there's the BBC's Chequered Flag Formula 1. It's available to download twice a week during the season and features interviews and previews, as well as a review of the action from a Grand Prix weekend. Preview shows tend to be made up of Five Live broadcasts that have been reformatted for the podcast.

Lights out and away we go…

And there you have it. There aren't many options, but the BBC/Channel 4's free offering and Sky's paid-for programming each has its own distinct flavour.

Then there's Liberty Media's own in-house effort, but that's currently restricted to race highlights, historic race archives and live timing in the UK.

Whether it's on TV, online, mobile or radio, it's easy to keep in touch with the goings-on in the world of F1. Even if you miss the race, you can still catch up elsewhere on various platforms.

The title fight is done and dusted, and there's just one race left in what's easily been one of the best season F1 has had in years. So tune in.