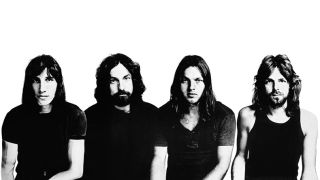 Sennheiser is to produce an upmix of Pink Floyd's classic track Comfortably Numb for an exhibition at London's V&A museum in May.

The original version was recorded at the Live 8 concert in Hyde Park in 2005 - the last time the band performed live together. The mix will be created using Sennheiser's Ambeo 3D (18.3) audio technology.

To celebrate the announcement, Pink Floyd's Roger Waters and Nick Mason made a rare public appearance together at London's Mayfair Hotel.

Sennheiser is the official audio partner of The Pink Floyd Exhibition: Their Mortal Remains, and its audio systems will be used throughout. The band used gear made by Sennheiser and Neumann (owned by Sennheiser) throughout their careers, and started using the Sennheiser MD 409 microphone.

The exhibition, which marks the 50th anniversary of the band's first album The Piper at the Gates of Dawn, takes the visitor on a chronological trip through Pink Floyd's history, encompassing music, art, design, sound technology and live performance.

Their Mortal Remains opens at the V&A on 13th May and runs until 1st October. Tickets are on sale now from the V&A.