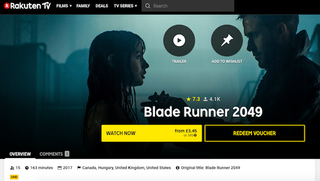 Rakuten TV has announced it will upgrade already-purchased Full HD films to the superior 4K HDR version for free – a policy also adopted by iTunes.

The Rakuten TV app is available on most smart TVs from the major manufacturers, including Samsung, Sony, Panasonic and LG. Having launched its 4K HDR service in December, owners of a 4K HDR TV should be able to take advantage of the free upgrade from next month, as well as the rest of the service’s 4K HDR library.

Alongside Netflix, Amazon Prime Video, Sky Q and iTunes, Rakuten is one of the most widely available platforms to offer movies in 4K and HDR.

Latest titles include The Florida Project, Despicable Me 2, Life, Jurassic World and Blade Runner 2049, with Ridley Scott’s All The Money In The World coming to the service on 30th April. These titles cost up to £3.50 to rent or £10 to buy.

The What Hi-Fi? archive of Ultra HD 4K Blu-ray reviews