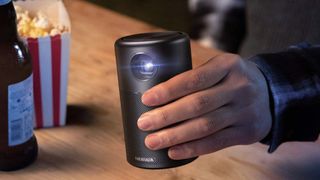 If it's still too soon for venturing to the cinema in your area, you're probably looking to level up movie nights at home. Supersizing your flatscreen TV might be out of the question, but a projector deal is a great – and cost effective – alternative for making your lounge feel more like date night at the pictures.

So step forward the Capsule by Nebula, a brand owned by Anker. It's a smart, portable, outdoor-friendly projector with a built-in Android-esque app store, and it can also be used as a dedicated Bluetooth speaker.

The best bit? It's currently just £270 at Amazon courtesy of a whopping 33 per cent discount.

Nebula Capsule projector £270 at Amazon
Under review, we praised the Capsule's "neat design, solid sound and access to streaming services". Its resolution of 854 x 480 pixels is par for the course when it comes to miniature projectors, and while a brightness of 100 lumens means you'll need a dimly-lit room, there's a lot to like here for the money.View Deal

So should you buy it? At this price, it's certainly worth consideration.

Paint it silver and the Capsule could be mistaken for a soda can. It isn’t that much heavier either, weighing in at just 425g.

Instead of a ring-pull are four buttons on the top: two for volume, one for power and one to switch the Capsule between projector and Bluetooth speaker modes. At the bottom are two ports: an HDMI connection and microUSB input for charging the Capsule's four-hour battery life.

Under review, we found using the projector "a breeze, either via the physical remote or the Android and iOS app. Other projectors have had us twisting and turning, trying to get the remote into the line of fire, so it’s nice to let wireless connectivity do the work."

What else do you need to know? Well, although the Capsule is an Android 7.1 device, apps such as Netflix, YouTube, Amazon Prime Video and BBC iPlayer are downloaded from Aptoide – a marketplace that runs on the Android operating system. The Capsule also allows you to stream video from iPhones and iPads via its AirPlay connection, and there's Miracast for Microsoft devices. Note that while it has Chromecast connectivity, its Android operating system means it can only send video, not receive it.

While we had reservations over the Nebula Capsule's value at its original price tag, with this discount it is much worthier of consideration for anyone wishing to create that movie-night ambience at home.

Read our full review of the Nebula Capsule