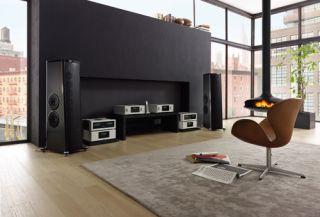 TV may have given us some of the biggest talking points on day two of CES 2014 in Las Vegas, but it was hi-fi and audio that led the way on Tuesday.

Bang & Olufsen, Naim Audio, McIntosh and T+A (HV series, pictured above) have all announced details of their latest products for the year ahead.

Read on for the highlights from day three of CES 2014, as whathifi.com continues to bring you the very latest news as it emerges from the show floor.

2014 is to be the year Bang & Olufsen "revolutionises the way people listen to music", according to CEO Tue Mantoni - speaking at the company's press conference.

B&O has developed the new BeoSound Essence system, which aims to offer a simple, one-touch operation of all its audio systems.

For a full-blown music system, connect the Essence to any pair of B&O loudspeakers. You can also have multiple Essences in different rooms.

MORE: Bang & Olufsen Essence makes listening to music as "easy as turning on the lights"

T+A has also updated its TCD 610 W subwoofer with the new TCD 610 W SE, while an all-in-one stereo system - the CARUSO Blu - completes the line-up.

One of the most extraordinary launches came courtesy of Naim Audio, with its new 'Statement' - consisting of the NAC S1 preamplifier and NAP S1 mono power amplifier.

Naim has long been associated with dynamic performance, but the 746 watts of power (one horsepower) delivered by each NAP S1 is in a different league.

The 'Statement' - a formidable and powerful combination - is set to go on sale in July this year with a projected price of $200,000.

Having unveiled its new AK240 portable audio player, Astell&Kern sprung a surprise on day three by announcing its first amplifier and stereo speakers.

The company's first ever complete hi-fi system for high-res audio consists of the Cube One integrated amplifier and two sets of speakers - the Castor and the Moon III.

Astell&Kern remains tight-lipped about the system - driven by an AK240 - and has yet to reveal any further details on pricing or concrete availability.

MORE: High-resolution audio - all you need to know

The MHA100 and MXA70 share the same casework and design, but the latter comes with a specially designed pair of two-way speakers.

Meanwhile, the MHA100 is the company's first dedicated headphone amp and will provide four digital inputs to allow playback of files in a variety of formats.

British company Damson has confirmed its move into the wireless headphone market with the launch of the 'Headbones' bone conduction headphones.

Using the skull's acoustic properties, Headbones sit on the temporal bone in front or behind the ear depending on the version, rather than inside the ear canal.

Audio vibrations are sent through the skull to the cochlea using the company's Incisor Diffusion Technology - found on the Twist and Jet wireless speakers.

We got to see McIntosh's first pair of prototype headphones, with the company developing its own range to go with the MHA100 (mentioned above).

The MHP1000 over-ear headphones are due to go on sale in the first half of 2014 for around $2000, with more affordable models to be added to the range in due course.

Elsewhere, Bang & Olufsen revealed the Form 2i headphones - an updated on its iconic design now featuring a microphone and a three-button remote.

Astell&Kern took the wraps off its new AKR02 earphones, which come in three different sizes and two styles. The buds are due in the US in Q1 and the UK soon after.

Philips is to launch its first smart TVs powered by the Android operating system in Q2 2014, following an announcement by TP Vision at CES 2014.

Selected European markets and Russia are expected be the first to get their hands on the new TVs in March 2014, with the UK to follow later in the year.

A new Ultra Short Throw Projector has been showcased by Sony as part of its Life Space UX concept - and it's due for a US launch this summer.

The model number is yet to be confirmed, but this projector can produce a 147in Ultra HD 4K image from a ridiculously short distance away - 28in in fact.

A UK launch is to be confirmed.

In another Sony announcement, the firm revealed a new smartphone in the form of Sony Xperia Z1 Compact - a 'mini' version of the flagship Xperia Z1.

Many of the Xperia Z1's features and performance are retained in the Compact, with a 2.2GHz quad-core processor and 2GB of RAM among its features.

It will come with Android 4.3 on-board at launch, with an update to Android 4.4 ‘Kit-Kat’ promised soon afterwards. A UK SIM-free price is to be confirmed.

• whathifi.com will continue to deliver all the latest news from CES 2014 as it happens. Follow us on Twitter and Facebook to make sure you don't miss out on anything!