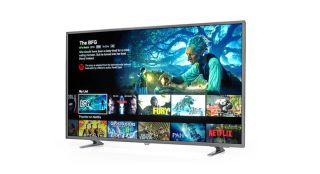 It didn’t exactly need a price drop to stand out, then - but who’s going to argue with one? Certainly not us. Especially when the it's a very decent 33% off our reviewed price in the Black Friday sales.

One of the best Black Friday TV deals so far, this Philips 4K television is a steal. You can save £200 on the original price, meaning we think it offers the best picture-per-pound performance out there.View Deal

It’s one of the easiest Black Friday deal recommendations we can make. At the Philips 50PUS6703’s original price, we were impressed at the dynamism and insight of its picture performance, as well as its decent range of streaming and catch-up apps, including Netflix (4K and HDR) and Amazon Prime Video (4K), BBC iPlayer, ITV Hub, All4 and Demand5.

Then there’s arguably its best feature: three-sided Ambilight, which effectively projects the colour palette of whatever’s on screen to the surrounding walls via little LEDs. Make no mistake, this is a great TV for anyone who can accommodate a 50-inch screen. Want a new TV this Black Friday? Look no further.