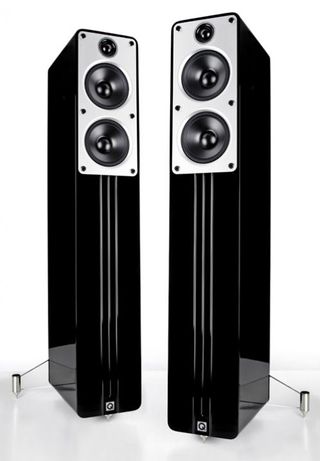 It’s one of the trickiest questions in the hi-fi-buying process: ‘which speakers should I choose?’. It’s a toughie for two reasons: first, there’s an almost baffling choice of loudspeaker brands and models out there; and second, as the final, and most obvious part of the audio chain, speakers need careful matching both with the electronics in your system and the room in which they're to be used.

Oh, and if you want a further complication, you’re likely to spend a lot of your listening time staring at the speakers, so they should look pretty acceptable, too.

System-matching is actually relatively simple, at least in electrical terms, when you realise one simple fact: you’re a lot more likely to damage a pair of speakers, not to mention making them sound horrid before they go ‘pop’, by driving them with too feeble an amplifier.

Most speakers can easily tolerate a lot of clean power – it’s the clipping and distortion created by an amplifier slogging to get your speakers moving that do the real damage. In fact there’s a school of though from some quarters that you actually need a lot more power than you may think if you’re to hear all the true dynamics of your favourite music.

But the main factor to consider when buying new loudspeakers is the nature of the room in which they’re to be used. There’s no point buying a pair of massive floorstanding speakers, say, or a pair of Quad’s electrostatics (above), if you listen in a broom cupboard.

Both kinds of speaker need space to breathe, the former to avoid standing waves bouncing back and forth and reinforcing the bass to an oppressive extent, the latter to allow sound propagated behind the speaker by the dipolar dispersion pattern, to travel to a rear wall and arrive at the listening position sufficiently behind the forward waves, thus giving that lovely unforced open Quad presentation.

It’s impossible to say ‘if your room is X metres by Y metres, you need these speakers, while a room 2X x 2Y will be better with these’, but you can get a pretty good idea what will suit your room by ensuring you do some auditioning in a demonstration room of roughly the same size.

Try them out at home

Sensible retailers will have rooms furnished more like domestic living spaces than test labs, to make sure the demonstrations are more representative of what you’ll hear at home.

However, if you’re buying a pair of very expensive speakers, we wouldn’t hand over the cash until we’d heard them either in our own room with our own system, or at least in a set-up as close as possible to replicating our own set-up.

The way your room is furnished can also affect the sound. Soft furnishing and ‘broken up’ surfaces – walls with bookshelves on them, for example – will help stop stray reflections, and damp down any tendency to boomy bass.

But you can go too far: a reader wrote to us saying he just couldn’t get any impression of soundstaging from his system, and only after lengthy discussion did we narrow it down to the fact that he was sitting on a high-backed sofa. The heavily-stuffed Dralon behind his head was soaking up massive amounts of high-frequency information, and robbing the sound of any sense of space.

As a rule of thumb, unless you have a truly cavernous room, you should probably aim for smaller speakers than you might imagine would be suitable, as these tend to give a tighter, more precise sound, and are less prone to room interactions than big floorstanders.

However, smaller speakers do produce less bass – it’s an inescapable matter of physics, and the need for larger drivers to shift a lot of air if you’re going to get ‘proper’ low frequencies.

If you want more bass in a smallish room, we’d suggest you think in terms of the same small speakers, coupled with an active subwoofer. That way you can tailor the bass response to the room, and tune it to get just the sound you’re after.

Five tips for matching speakers to your room