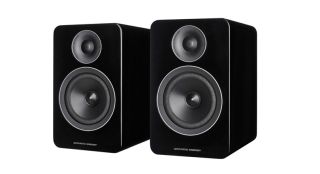 In their simplest form, traditional stereo hi-fi systems consist of a source component, an integrated amplifier and a pair of passive speakers. Pretty straightforward, right?

But if you break down the signal path it can be split into a greater number of distinct sections, most of which are lumped together in this simple set-up.

First, there’s a source component, which is the piece of kit that plays the music. This can be a CD player, music streamer, record player or even a computer or phone. Next we have a preamplifier section, this switches between sources and controls the volume level.

If you have a record player, you’ll also need a phono stage to increase the output from your cartridge to line level and equalise the signal before feeding it to the preamp circuit (we’ve omitted the phono stage from our diagram to keep things simple).

Now you need muscle, something that can take the line-level signal from the preamp and increase it enough to drive a pair of speakers – say hello to the power amplifier. However, this isn’t directly connected to your speaker’s drive units.

Its output has to pass through a crossover filter network that in a two-way speaker splits the signal into just high frequencies (to go to the tweeter) and everything else for the larger mid/bass unit.

If you have a three-way speaker, then the crossover splits the sound up into three parts – treble, midrange and bass. This crossover network doesn’t need a power source to work, and in that sense it is considered passive. That’s more or less the signal path in a conventional passive set-up.

In an active system things are the same until after the preamp stage. The signal from the preamp goes into an active crossover network. While this performs the same job as the crossover in the passive set-up it works at line level (around 2v) rather than speaker level (typically 15-35v).

Working at lower signal levels means the components used can be optimised for precision rather than power handling. Such a design would normally use active components, and on more sophisticated products, some form of signal processing (whether digital or not) to get the best out of the drive units.

The result is a filter network that is (potentially) way more accurate in its operation, and delivers a better integrated and optimised sound.

Each separated frequency band of this line-level signal is then sent to a dedicated power amp that feeds as many drive units as are responsible for delivering those frequencies.

On paper, active speakers have a whole host of advantages. Their crossover design gives the designer much greater control over the signal and is far less prone to losses and distortion when compared to a passive filter alternative.

As the power amplification is integrated into the design, it can be optimised for a specific drive unit. Because it’s normally built into the box, there’s no need for long lengths of speaker cable between the two, avoiding any distortion or loss caused by the wires. Simply put, there’s more grip and better control.

These benefits would seem to give active speakers a generous edge, but there are also downsides. There aren’t many speaker manufacturers that can make amplification, so the usual path is to buy in modules from an OEM supplier. There’s nothing wrong with this in principle, but things often fall short when it comes to implementation. The result is that the sound performance of the final active speaker is rarely as good as it could be.

Active speakers suffer in terms of perceived value on the shop floor too. Their electronics tend to be hidden, yet there will be an obvious price premium over similar-looking passive alternatives. Break down the respective costs and it usually turns out that the active option is the better value route, as it consists of multiple power amplifiers – a simple two-way speaker still needs four mono power amps – whereas a passive set makes do with a single stereo amp to work its four drive units.

Active designs also limit the amount of upgrading possible. You can’t just change the power amps, for example, the whole lot has to go. That leaves less scope for enthusiasts to mix and match. You either accept the power amplifier/speaker combination as a whole or you don’t.

While all active speakers are considered powered, not all powered speakers should be called active.

The difference is that a powered speaker has the same signal path as a passive set-up, but the amplification (often both pre and power amp) is hidden in one of the speaker enclosures. There will also be a speaker cable link between the master speaker (that has the amplification) and the slave (passive) partner.

Most affordable powered models tend to use such a configuration. Such an approach has some of the neatness of truly active operation but few of the technical benefits.