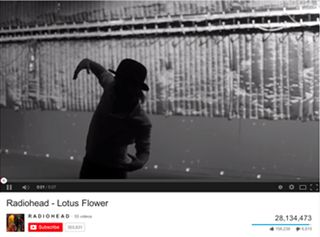 Until now, YouTube has been a popular means of discovering and listening to music – but it seems as if some fairly high-profile artists are now about to disappear from the Google-owned website.

That's because YouTube has been renegotiating contracts with record labels as it prepares to unveil a music subscription service – and a number of independent labels have failed to agree terms.

MORE: YouTube delays music-streaming service launch to "get it right"

It's a development that's certain to have a massive impact as a number of high-profile artists like Adele, the Arctic Monkeys and Radiohead will have their music videos removed/blocked by YouTube.

And don't underestimate how significant that could be – a recent study from Edison Research revealed that more than a third Americans aged 12 and older used the platform for listening to music.

It's thought that labels representing as much as 95 per cent of the music industry are on board with the new YouTube contract terms, including the major labels including Universal, Sony and Warner.

Smaller labels, however, have so far resisted signing and some have said the offered terms are "highly unfavourable", while Radiohead guitarist Ed O'Brien has also voiced criticism of Google.

But there is one source reporting that what this could actually mean is that such videos can't be monetised if they haven't been submitted through YouTube's music streaming service, rather than removed completely. We'll be watching with great interest to see if that's actually the case.

YouTube head of content and business operations Robert Kyncl told the Financial Times: "While we wish that we had a 100 per cent success rate, we understand that is not likely an achievable goal and therefore it is our responsibility... to launch the enhanced music experience."

Alison Wenham of the Worldwide Independent Network (WIN), however, responded: "We have tried and will continue to try to help YouTube understand just how important independent music is to any streaming service and why it should be valued accordingly."

WIN, the Featured Artists Coalition and European independents association Impala are looking to the European Commission to intervene to "stop YouTube abusing its market power".

IMPALA executive chair Helen Smith said "Europe has already had to take a tough line with Google on issues such as search and privacy. Prompt intervention with YouTube must be the next step."

It's understood, however, that music videos from independent labels that are screened on YouTube via Vevo will remain available, with Vevo having signed terms with the video sharing website.

The news that YouTube is looking to introduce a subscription service should come as no surprise, with the market for online music streaming showing significant growth over the past few months.

YouTube is no doubt inspired by the success of Spotify, Deezer and indeed sister Google Play Music All Access, while Amazon recently entered the game and Apple has bought Beats Music.