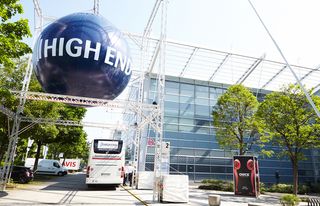 While the Bristol Show may be where it's at for hi-fi (and home cinema) fans in the UK, the High End show takes the spoils for mainland Europe - and arguably the world - when it comes, as the name should suggest, to high-end hi-fi. Anything and everything audio-related is represented, so expect an avalanche of expensive amplifiers, speakers, turntables and more.

Here are the highlights...

Dynaudio aims to 'top a legend' with new Contour speakers

Cyrus One amplifier returns at £699

ELAC celebrates its 90th anniversary with new speakers and turntables

The company will be showing off its new Stratos all-in-one DAC, preamp, phono stage and headphone amplifier, capable of upsampling to 32-bit/382kHz and looking to build on the success of the GT40.

The new Niagara 1000 and 7000 "power noise-dissipation systems" will be on display, alongside the fresh additions to the company's USB DAC range, the DragonFly Black, DragonFly Red and the Beetle.

There will be a new M-ONE integrated amplifier with DAC and Bluetooth on show at Munich, a near relation to the M-DAC from what we can tell (with added amplification). There are a selection of analogue and digital inputs, including USB, and support for hi-resolution DSD files.

B&O will be demoing its striking 90th anniversary BeoLab 90 speakers - we'll be in the queue to hear them. You can find out more about them, and Bang & Olufsen itself, in our 90 years of B&O feature.

In-car audio is an increasing focus for high-end audio brands and Burmester will be showing off systems inside Porsche and Mercedes-Benz cars at the show. The company's new Phase 3 system will also be on display.

Chord is set to preview the TToby partnering amp for the Hugo TT and showcase the SPM1050 MKII, a 200W stereo amp that's said to feature several improvements over the original.

Creek will be demoing the new Evolution 100CD CD player and DAC, plus the latest in the Evolution series of amplifiers.

Interesting news from Cyrus, who will be releasing a new, feature-packed Cyrus One amplifier. An update to the classic Cyrus One amp, which launched the company in 1984, the new product features Bluetooth streaming, a phono stage and a headphone amp, and promises to showcase the company "at its most affordable price ever".

Denon will be presenting its new 2500NE Series, comprising the PMA-2500NE amp and the DCD-2500NE SACD player.

Munich will mark the world premiere of the new Dynaudio Contour range. Dynaudio says of the new range: "The completely new designs incorporate wonderful new technologies and materials. While worthy successors to the legendary Dynaudio loudspeaker series, the latest models are a radical break from the old designs." They'll be unveiled live at 10.30am (9.30am GMT).

Elac is celebrating its 90th anniversary with new speakers and new turntables.

Visitors at Eclipse's booth can sample a demo of its 'accurate sound' loudspeaker tech in a 5.2.4 Dolby Atmos configuration, which can purportedly produce 'breathtakingly lifelike audio'.

Focal will be showing the latest model in its Sopra line of high fidelity speakers.

New from Furutech at High End will be the NCF Series of mains power products.

There will be a new set of planar magnetic headphones at High End, the HiFiMAN Edition X. Borrowing technology from the flagship HE1000 headphones, they sport an ultra-thin diaphragm, assymetrical magnetic circuit, and a new headband and cable design.

Visitors to High End will be able to see the company's Reference series, the famous Blade speakers, plus new additions in the form of the Muo and Egg.

Mission will be present, with its all-new budget priced LX speaker series in tow. The full range of speakers will be on show.

Naim will be showing-off its DR NAP500 power amplifier and its latest Naim Records releases.

It's not all hi-fi - you'll be able to take a look at Panasonic's latest flagship Ultra HD TV and its new Ultra HD Blu-ray player, the UB900.

Quad has plenty of new products to show-off, including the VA-One valve amplifer, the new Z Series speakers and the Artera One system.

British headphone manufacturer RHA will have its full range of headphones on show, from the entry-level S Series to the hi-res audio certified MA Series and the flagship T Series.

Shure is claiming a first with the launch of a pair of noise-isolating electrostatic earphones, the KSE1500, and also has the new SHA900 portable DAC and headphone amp. Expect more details when the show begins.

The Technics SL-1200GAE will no doubt get plenty of attention, but you'll also be able to see the company's full range of new components for 2016, from the EAH-T700 headphones to the Reference R1 Series and the G-30 Series.

Fresh off the production line from Wharfedale in time for Munich will be the Diamond Active A1 speakers and the brand new Reva speaker range.

WB will take the wraps off its A.C.T One Evolution 'P1', a new project that promises a 'revolution in carbon fibre'. Expect a new addition to the company's Geometry Series of speakers.