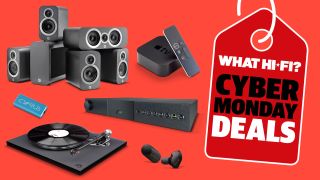 Black Friday might be over for another year, but that means it's now all about the Cyber Monday sales, but we all know there are plenty of deals alive and kicking. Just a few minutes online and you'll find Cyber Monday savings on everything from TVs and turntables to headphones and speakers.

But what are the biggest and best Cyber Monday deals? We've saved your fingers an hour or two of clicking by rounding up all the best deals on one handy page. There's up to 50% off some products with five-star (and Award-winning) TVs, headphones and speakers all included from some of the biggest brands in the business, including Bose, Denon, Marantz, Samsung and Sony.

We'll be updating this page regularly over the next week or so as new offers and savings appear on our radar – be sure to bookmark it so the best Cyber Monday deals are only ever a click away.

Sony WH-1000XM3 headphones (Black) £229 at Amazon
Sony's wireless noise-cancelling headphones are impressive across the board and their price is only getting lower. A five-star product and Award-winner, this is the best price we've seen so far.View Deal

LG OLED55C9PLA OLED TV for £1299 at Amazon
Brand new for this year, LG's C9 OLED improves on last year's C8 in almost every way, making it comfortably the better buy if you can stretch to it. Doing so is now a lot easier than it was, too, as the price has steadily tumbled since launch. At Sevenoaks you can also save 33% on a Sky TV package.View Deal

Cambridge Audio Melomania 1 wireless earbuds £99.95
These five-star wireless buds blew us away with their rich, detailed sound. What's more, they're now even cheaper than the Apple AirPods 2 and can be yours for just £100.View Deal

Amazon Fire TV Cube £79.99 at Amazon
A brilliant video streamer that's packed with apps (including, now, the Apple TV app) and produces a great picture and sound. It'll also allow you to control your entire AV system via Alexa. Great value before, it's a steal at this new Cyber Monday price.View Deal

Apple AirPods with wireless charging £168 at Currys
Fancy a pair of AirPods but with the fancy wireless charger? This £40 saving is available in the Amazon Cyber Monday sale.View Deal

JBL Reflect Flow true wireless earbuds £99.99 at Argos
In our review we praised the Reflect Flow's detail, musicality and strong bass depth. They also deliver a solid fit and long battery life, perfect for those evening runs. Expect up to 10 hours per charge.
View Deal

Marantz PM6006 UK Edition £279 at Richer Sounds
Dynamically expressive with a smooth, balanced and insightful delivery: there are plenty of reasons to go for this Award-winning amplifier. This saving only makes the deal sweeter.View Deal