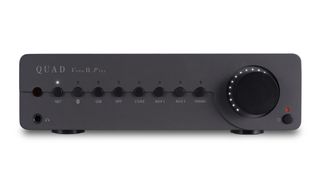 Quad has incorporated Play-Fi streaming and multi-room capabilities into its 2018 integrated amplifier to create the Quad Vena II Play.

The Vena II Play is an entirely separate device to the original Quad Vena II and is now the first and only Quad device with streaming over wi-fi. Making that possible on the inside is the same DAC and Play-Fi streaming platform as inside the Audiolab 6000N Play, What Hi-Fi?'s recently crowned Best Music Streamer Product of the Year.

The addition of DTS's Play-Fi technology brings hi-res music streaming at up to 24-bit/192kHz, access to all the popular audio streaming services and DLNA device compatibility too, such as a NAS drive or media server. It also adds multi-room connections with up to 32 other Play-Fi devices, all controllable through the Play-Fi app.

The Quad Vena II Play can handle streamed files such as MP3, MP4A, AAC, FLAC, WAV and AIFF. There's also a Ethernet port to connect it directly to the network and it's an official WWA (Works With Alexa) piece of kit, so you can voice control it by connecting the Vena II Play up to an Echo or Dot, for example.

Externally, the only other changes are the addition of a 'NET' button on the front panel and the nice touch of a ring of white LEDs around the rotary control to indicate the current volume level.