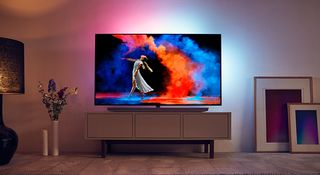 Philips ended 2017 with a bang, at least as far as its TVs are concerned - its 55POS9002 OLED and 50PUS6272 LED screens both received extremely positive five-star reviews. So the company, which has been owned by Chinese leviathan TPV since 2012, intends to build on these strong foundations with an extensive new range for 2018.

The entry-level 4K series is dubbed '6503', and will be available in 43, 50, 55 and 65in versions. All feature Philips' unique Ambilight technology (three-sided on these screens), the company's bespoke 'Saphi' smart interface and 'Pixel Precise Ultra' processing engine, as well as HDR.

Above these four TVs are the '7303' and '7803' models. As well as three-sided Ambilight and HDR, the 7303 series (which comes in the same 43, 50, 55 and 65in screen sizes as the 6503 series) adds DTS-HD Premium audio processing and, even more significantly, the 'P5 Perfect Picture' processing engine that made the 55POS9002 OLED TV such an impressive proposition. These are Android TV-equipped TVs, ready for full Google Assistant interactivity via a firmware upgrade that's hopefully coming in time for the products' launch.

The 7803 series (shown above and available in 49, 55, 65 and 75in versions) is intended as an aesthetic upgrade on the 7303 models - Philips is making much of these TVs' "premium European design" and aluminium finish.

But, given the extremely aggressive pricing of a lot of 2017's best OLED TVs, Philips acknowledges that premium LED TVs may cease to be relevant sooner rather than later. Consequently it's concentrating its higher-end efforts on OLED technology.

There will be five Philips OLEDs for 2018. The deeply impressive 55in POS9002 continues, and also becomes available in a 65in version. Inexplicably, Philips has chosen not to shine a little of the 55in model's glory onto its bigger brother - it's dubbed the larger TV 'OLED 873' rather than (the surely more obvious) 65POS9002.

MORE: What is OLED?

All five OLED TVs feature the P5 engine, three-sided Ambilight, Android TV operating system and Google Assistant potential. They're all supplied with a pair of remote controls, one a full-on QWERTY design of the type Philips has loved for years, the second a swish little wand of minimal buttons (pictured above).

There are no firm details about pricing as yet, while availability (which is, to an extent, dependent on Google having its Assistant up to the sort of speed Philips desires) is no more specifc than "the first half of 2018". As soon as details are more concrete we will bring them to you.