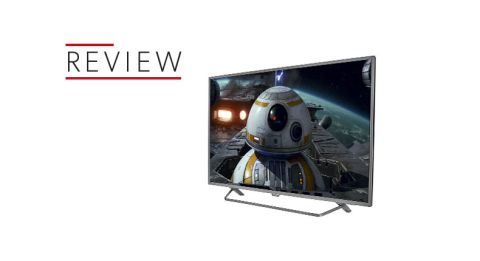 What would you expect from a TV costing a touch less than £500? Nothing spectacular, we’d imagine. Maybe a small screen with 4K, or a slightly bigger one without? HDR seems unlikely, at least in any meaningful fashion.

If that sounds about right, it’s time to reset your expectations. The Philips 50PUS6272 is 50in and has 4K, HDR and even Ambilight, all for £460. What’s more, it goes beyond simple specs by offering performance that’s genuinely superb for the money.

However, when you first turn the Philips on, you could be mistaken for thinking you’ve bought a real dud. Unlike most modern TVs, which are calibrated to look pretty great as soon as you get them out of the box, the 50PUS6272 looks absolutely dreadful.

The two main culprits are an 'eco' picture mode that isn’t in the main Eco menu but hidden in Advanced Settings, and a Noise Reduction feature that has a strange habit of turning things green.

Don’t believe us? Leave the TV on its defaults, play the start of Looper and check out Joseph Gordon-Levitt’s face. Yes, that green mass is supposed to be stubble.

The good news is: deactivating those two ‘features’ fixes the obvious flaws, but the bad news is you still need to do a lot of work to get this TV looking its very best.

Every TV is different, so we always recommend you calibrate the picture using a THX Optimizer disc - but this is a particularly arduous TV to set up.

For normal viewing, the Movie preset turns off many of the set’s more harmful picture processing modes. In addition, we’d recommend adding a few points to Colour and Sharpness, and dropping Contrast and Brightness down.

Colour Enhancement is generally best set to Minimum, and Colour Temperature to Normal. Setting Contrast Mode to Optimized for Picture works best with most content, and Video Contrast needs just a few points taking off it.

Feed the TV some HDR content and a whole other selection of presets is unlocked. Of these, we prefer HDR Vivid, but you may want to drop the colour and turn Noise Reduction, MPEG Artefact Reduction and Motion Styles off.

After all that, you’ll want to settle down and watch something on your new TV - probably in HDR.

Here's a much brighter, more vibrant and more dynamic picture than we’ve come to expect from TVs at this price, and the TV does a great job with the opening of Guardians of the Galaxy Vol.2.

You can almost feel the warmth of the dusky, Missourian landscape that fills the film’s first shots, and the woods where Ego takes Meredith are lush and verdant.

The TV isn’t artificially or clumsily boosting colours, and the presentation is far more sophisticated than expected. It combines those vibrant elements with natural skin-tones and fairly nuanced shading.

Contrast is very good too, with clouds better defined here than they are on the more expensive Panasonic TX-50EX750B (£850). The Philips is also sharper, and the image stands out more from the screen.

Each object, from the T-top Mustang to Rocket’s periscope gun, is solid and three-dimensional where many rivals at this price look flat and uninviting.

We switch to Planet Earth II on 4K HDR Blu-ray and it is, again, a bright, vibrant and punchy performance, with sharply drawn edges and loads of detail.

Distant mountains that are a blur of snow and rock on the Panasonic have clear outcrops on the Philips. Again, it’s that solidity and definition, and the combination of vibrancy and realism to the colours, that make the Philips’ HDR performance such a pleasure.

Drop down to Full HD, via Blu-ray or one of the tuners (satellite and Freeview Play are built-in), and the performance is again a success - albeit a slightly more qualified one.

Post-calibration the set is less bright than some rivals, but the trade-off is more subtlety in bright elements. Lights that are large, simple balls of bright white on some sets are smaller, purer blooms that emanate gradually, diminish subtly and reflect off the objects around them.

The lamps in Joe’s apartment, particularly in the scene that sees him return after it’s been ransacked, are great examples.

The low Sharpness setting we chose prevents the sub-4K pictures looking artificially enhanced, but it does result in an image that’s a bit softer than some rivals.

Black detail is a little lower, too, although the deficiency is only really noticeable in side-by-side comparisons - and, overall, the picture is natural and likeable, with good black depth, well-judged colours and plenty of detail. Motion-handling is convincing throughout, suffering only a little (perfectly acceptable) judder when the processing is turned off.

The Philips even does an admirable job with standard-def. The picture is again a bit soft, but colours are nicely controlled (even Michael Portillo’s preposterous suit-and-shirt combos), detail is good and motion impresses once again.

Gamers will also appreciate the Philips’ input lag of around 27ms and, if they’re playing on an HDR console, its punch and vibrancy.

Whatever you’re watching (or playing), the three-sided Ambilight is as joyous as ever. Extending the onscreen action onto the wall behind and around the telly via coloured LEDs, Ambilight not only looks spectacular (the orange of an open fire in Marco Polo extending up the wall, for example) - it also draws the eye in and makes the whole screen seem bigger.

But all of the above assumes you’re sitting fairly straight-on to the telly, as its viewing angles aren’t great. Move a little off-axis and things wash out fairly quickly. It’s no worse here than with Samsung’s much more expensive 2017 QLEDs, but it is worth bearing in mind.

Given the 50PUS6272’s approach to picture settings, it’s no surprise it has an abundance of audio options.

However, the default Original preset is the one to stick with – and despite the claims, the ‘Incredible Surround’ mode is neither 'incredible' nor 'surround'. The one mode that is worth using is Clear Sound, and that’s enabled as standard.

In short, you get a relatively clear and dynamic audio performance by TV standards. It’s lacking a bit in weight, there’s not a great deal of detail and subtler effects can get lost, but sound is projected quite well and you’re never left trying to translate a murky mumble.

All told, it’s not terribly nuanced, but for the money it’s perfectly fine - though, as is always the case, we’d recommend a separate sound solution. If spending loads on a speaker to go with a TV as cost-effective as this seems daft, you can always opt for the £60 JVC TH-W513B - it is a big improvement.

On the app front, the Philips is pretty well appointed. Amazon Video works in 4K (but not HDR), while Netflix gives you the full 4K HDR package.

All four of the main catch-up apps (iPlayer, ITV Hub, All4 and Demand5) are also present, and you can stream pay-as-you-go blockbusters from Rakuten. Google Play Movies and TV would be preferable, of course, but the Philips pretty much covers the bases in terms of content.

Unlike Philips’ higher-end TVs, such as the 55POS9002 OLED, the 50PUS6272 doesn’t run on Android TV. Instead it has a Linux-based operating system. We’re not huge fans of Android TV, but this Linux system is unarguably worse to use.

Sluggish, basic and somewhat ugly, the OS makes it a bit of a chore to get to the content you’re after. Deleting the apps you’ve no intention of using will streamline operations in the long run.

The search function is poor, leaving you unsure whether it has searched and found nothing or just isn’t working at all, and the EPG is rudimentary (although there is a ‘Recommended’ tab that looks much nicer).

The remote does, at least, have a dedicated Netflix button, which allows regular users to skip straight past the faff of the GUI - but it’s an otherwise rather poor zapper, with a cluttered arrangement of spongy buttons.

Ultimately, though, these shortcomings are minor in the face of performance that’s much better than the eye-catchingly low price would suggest.

Yes, it can be difficult to use, it’s a real pig to get performing at its best and viewing angles aren’t that good. But those issues are well worth putting up with for a picture this good at such a reasonable price.