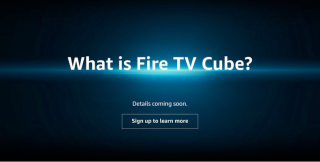 Retail giant Amazon has posted an email subscription page for a ‘Fire TV Cube’, prompting those interested in the new product to sign up for more information. However, there currently isn’t any further information, with ‘details coming soon’.

The page was spotted by AFTVnews, which has previously reported other Amazon leaks, and suggests a new TV video streamer will soon be revealed.

The cube-shaped newcomer could feature an Echo Dot-like top panel with the familiar blue LED light bar enabling voice commands. The light through the teaser image (above) appears to confirm that.

Last year, AFTVnews reported that such a device would also have far-field microphones, a built-in speaker and an IR emitter for controlling other TV and home cinema kit.

If this is Amazon’s new flagship video streamer, we’d expect it to match the current model’s support for 4K, HDR10 and Dolby Atmos. It may have a faster processor, too.

The Fire TV Cube is unlikely to introduce Dolby Vision compatibility – an HDR format Amazon hasn’t previously backed – but could be the first streamer to support the rival metadata HDR format, HDR10+, now Amazon Prime Video has started to stream it.

Perhaps this could be the Fire TV to dethrone the class-leading Apple TV 4K.