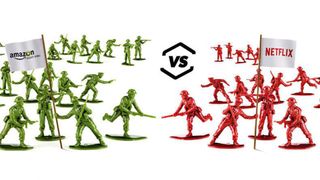 Watching films from the comfort of your own sofa no longer requires shopping for Blu-ray discs and setting aside a huge amount of shelf space to accommodate your growing collection (although we won't deny the satisfaction that can bring).

There has been a similar change in watching TV – the days when your evening’s viewing revolved around Radio Times listings and programme recording are long gone.

The arrival of video streaming services has seen to that, spearheading a ‘next generation’ of TV and film viewing that looks set to stay. With Apple TV+ and Disney+ launching later this year, the streaming space is only going to get more crowded, too.

For the past few years, having thousands of hours of content available to stream 24/7 to our telly at home or on the smartphone in our pocket has changed our viewing habits, making marathon film trilogies and binge-watching TV boxsets the new going out.

It doesn’t have to come at a price either, with YouTube and UK catch-up services such as BBC iPlayer and ITV Player serving up hour after hour of free streaming. What a world we live in, eh?

But none of the other services has the content diversity or versatility of the two giants of video streaming, Amazon Prime Video and Netflix. Theirs is an intense battle that mirrors the rivalry between Spotify and Apple Music in music streaming.

Both offer thousands of movies and TV shows, old and new, for as little as £6 per month. There probably aren’t enough hours in the day to warrant two subscriptions, so which service should get your vote?

For the first month, why not try both? Amazon and Netflix each offer 30-day free trials, so it goes without saying that you should reap the benefits of having twice as much content as you could ever sit through. Just because you can - and because they offer different content.

But when the time is up, so is the two services’ subscription homogeneity. Amazon offers two cancel-anytime subscription tiers: ‘Prime Video’ for £6 per month, which is the standard video streaming service, and a more Amazon-embracing £8 per month (or £79 per year upfront) ‘Prime’ membership.

Both are inclusive of Amazon’s 4K and HDR content, and allow two screens to stream from the same account, with each video limited to one device at a time.

Netflix has a more tiered approach and, unless you’re happy settling for the standard-definition streams of the digital Dark Ages, is going to set you back more.

Up from the basic £5.99 monthly subscription, which allows SD playback to only one screen at a time, is the £8.99 tier (recently increased from £7.99) that grants you access to high-definition streams to two screens simultaneously.

To take advantage of the 4K and HDR content Netflix has to offer, you have to sign up to the £11.99 (previously £9.99) per month premium tier, which also takes the screen count to four – a good-value family-size package, for sure.

For couples and singletons though, Amazon is the more affordable option – but when it comes to watching new 4K HDR material, Netflix does have a slight upper hand.

Perhaps surprisingly, there’s not much crossover between the two catalogues, so paying out for both wouldn’t be as pointless as it initially seems.

It's difficult to nail down the exact number of titles for each service - figures are constantly changing as series and movies are added and removed - but it's estimated that Amazon trumps Netflix by almost double.

Size isn’t everything of course, and many will no doubt veer towards one based on commitments to certain shows that are exclusive to each of the services. Do you care more about Mr. Robot, The Marvelous Mrs. Maisel and The Grand Tour (Amazon), or House of Cards, The Crown and Stranger Things (Netflix)?

Both groom their catalogues on a regular basis, vary their offerings from country to country, and pluck movies from the post-Blu-ray-release window – so don’t go expecting films that have just hit the shelves or the latest series of TV shows before the next one has started.

That said, Amazon definitely puts a greater priority on adding popular films when it can, which is why at the time of writing you'll find relatively recent hits such as John Wick 2, Suspiria and Hereditary.

Today, 'Originals' (TV shows and movies produced by Netflix and Amazon’s own studios) sit at the forefront of the services’ campaigns.

Netflix has more (and perhaps more popular) programming in its repertoire, led by acclaimed dramas Better Call Saul, Orange Is The New Black, Master of None, Mindhunter and Marvel’s Daredevil, plus smash hit documentaries such as Making a Murderer and Evil Genius, and an increasing catalogue of excellent original films like The Fundamentals of Caring and Mudbound. Future high-profile releases include Scorsese-directed The Irishman and Michael C Hall-starring In The Shadow of the Moon.

Amazon has certainly stepped up its game, with the likes of Bosch, The Man in the High Castle, Tom Clancy's Jack Ryan and the All Or Nothing sports documentaries, not to mention The Grand Tour, fronted by popular petrol-heads Clarkson, Hammond and May. Amazon Studios' film output is getting more and more impressive too following the Award-winning success of Manchester by the Sea. Paterson, The Salesman, You Were Never Really Here and Don't Worry, He Won't Get Far on Foot are further success stories.

The service has been taking a crowdsourcing-like ‘have your say’ approach to new content, too, releasing numerous pilot episodes that viewers can vote on to determine which are turned into full-length series.

Despite Amazon's best efforts, Netflix has always managed to stay one step ahead of its closest rival and has crept even further ahead over recent months, particularly when it comes to movies: Amazon seems determined to give most of the movies it makes a run at the cinema that delays streaming availability, whereas Netflix puts everything it makes (which is quite a lot more) straight onto its own service.

Remember, though, that, unlike Netflix, Amazon is also a digital equivalent of Blockbuster, with the TV shows and films included within Prime sitting alongside an a la carte menu of both brand-new and old pay-for TV and film rentals.

‘Originals’ is where both services’ 4K and HDR offerings begin.

There are roughly 100 seasons of TV shows and a more modest collection of films in Ultra HD, many of which are also available in HDR (High Dynamic Range) - right up to HDR10+ or Dolby Vision if you've got a TV capable of playing one of those more advanced formats. Dolby Atmos support arrived last year, but as with Vision content there's only a handful of titles.

Netflix similarly bigs up its original content by wrapping it in 4K and HDR (including Dolby Vision but not HDR+), starting with the first series of House of Cards and also incorporating Stranger Things, Lost in Space, Godless, Altered Carbon, Daredevil and its other Marvel character-based live action dramas, including Jessica Jones and Luke Cage.

Both services throw in a fair few 4K HDR films (Amazon: The Neon Demon, Ex-Machina...; Netflix: Roma, Annihilation...) and Amazon offers some more to rent or buy too.

Streaming isn’t the exclusive domain of the dedicated couch potato either.

Both services are supported on a wide number of platforms, including PCs, laptops, Android and iOS smartphones, as well as TVs, Blu-ray players and games consoles, and are therefore as readily available on-the-fly as Facebook and Twitter.

Netflix has the edge here. It’s everywhere, on everything. While Amazon is now across almost all smart TV offerings, there’s no ‘almost’ about it for Netflix, which is as much of a household app on Sony, Samsung, LG and Philips televisions as BBC iPlayer and YouTube. It also plays ball with Windows phones and Chromecast.

Access to Amazon Prime Video’s catalogue is pretty much ubiquitous, though – something we haven’t always been able to say. When we last revisited Prime Video, its app was absent from Apple’s TV and Google’s Chromecast video streamers, due to disputes between the rival firms. Thankfully, those glaring omissions are no more, and it is now present on Apple TV, and Google Chromecasts should get the app shortly. Amazon is of course concerned with native compatibility on its Fire phones, tablets and TV sticks, too.

Amazon was the first to allow its subscribers to download titles and watch them offline but, predictably, Netflix has followed suit.

Amazon Prime Video used to be something of a nightmare to use if you're after 4K material, but it's is now easier to find and search for. It now has its own category header near the top of the home page – as do the individual TV and film pages. Just as every title included in a Prime subscription bears an easily identifiable tag, each 4K title bears a ‘UHD’ one.

Netflix is better when it comes to search - there is just one entry for each show or movie, and it will automatically play in the best quality it's available in that your TV can handle. It's extremely slick.

The general approach is similar, with home screens dominated by seemingly endless lists of categories, from ‘Continue Watching’ and ‘Recently Added’ to ‘Independent Movies’ and ‘Award-winning Movies’, but Netflix is decidedly smoother and slicker in operation and does a better job of recommending new stuff that you'll like.

You are unlikely to choose one service over the other based solely on performance.

On both, a good many shows and films are available in 5.1-channel surround sound and, with regards to picture, the effort each service has put towards streaming quality over the past few years has paid off – HD material looks impressively bright, clean and sharp on our LG OLED65C8PLA TV, Apple Macbook and Apple iPhone XS Max.

On the TV, it’s not a million miles from the standard you’d expect from playing a Blu-ray disc.

Through both Amazon and Netflix, lines are crisp, colours deep and motion handled as though stability has never been a streaming problem.

Unlike fast food or Bluetooth playback, the convenience of video-streaming services requires hardly any sacrifices in quality, and anyone just out of a three-year hibernation wouldn’t believe the progress that’s been made, let alone how juicy Ultra HD looks (once they’d looked up what that was).

A couple of years ago, this fight would have been over by round two, with Netflix lifting the belt over Amazon’s crumpled figure.

But to its credit, Amazon has risen to challenge its rival’s long-term supremacy, pruning its service to be more competitive in terms of both pricing and catalogue, and enhancing its user experience.

Amazon Video is the most affordable way to watch 4K and HDR content (half the price of Netflix, in fact!) and, for heavy users of Amazon’s shopping and music streaming, it’s an attractive option as part of its complete Prime package. It's the option.

For those who aren't interested in buying into Amazon's ecosystem, though, Netflix is omnipresent and effortless to use, and majors in quality – both in terms of content and performance. A recent price increase means that 4K HDR content is comparatively expensive. But if you can afford it, you'll have access to the best streaming catalogue on the market.