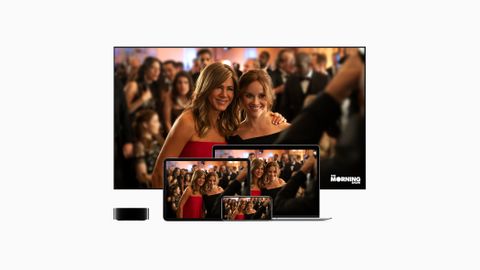 Apple TV+’s content is entertaining enough and brilliantly produced but, currently, there’s nowhere near enough of it

Barely a week goes by without the launch of a new streaming service, but even in a rapidly expanding market, you wonder whether there is room for everyone.

For most people, a single, premium subscription to one of the established behemoths, such as Netflix or Amazon Prime Video, will be the limit. It's a bold brand that decides to have a crack at unseating either of those.

Even the richest company in the world appears to have reservations about entering that fight, which is why Apple is pitching its Apple TV+ streaming service not as a replacement for Netflix or Amazon, but as a more affordable offering that people might subscribe to on top of their existing premium streaming service.

In that way, Apple TV+ occupies the same ground as the recently launched Disney+. But, while Disney has a vast back catalogue of content with which it can create a huge streaming library, Apple is relying on a handful of lavishly produced exclusives in order to draw streamers in.

It’s a strategy that’s only partly successful: Apple TV Plus certainly boasts some enjoyable content that looks and sounds superb, but there’s no way around the fact that it looks like rather poor value compared to most video streaming services and currently lacks the sort of irresistible, must-watch show that makes taking out a subscription an enticing prospect.

But many people will pay nothing for their first year of Apple TV+, as a twelve-month subscription is currently included with the purchase of almost any new Apple device, whether it’s an iPhone, iPad, iPod Touch, Mac or even an Apple TV.

However you pay (or don’t), you can share your subscription with five family members and all six people on the account can be streaming simultaneously.

Given the company’s track record, you might expect that Apple TV Plus would be restricted to Apple devices, but that’s thankfully not the case. It is available on all Apple devices, of course, but you can also access it on Roku and Amazon Fire TV devices, as well as many of the latest TVs from Samsung, LG and Sony, plus a few Vizio TVs too.

The service is built into the Apple TV app, which also integrates Apple’s pay-as-you-go film and TV streaming store (one of the best places to rent 4K HDR films) and also acts as a hub for content from a number of other streaming services, including Amazon Prime Video and even Disney+, as well as (in the UK) BBC iPlayer, ITV Hub, All 4 and My5.

It’s important to note that you don’t need to be an Apple TV+ subscriber in order to make use of the Apple TV app, so you can, for example, rent or buy blockbuster movies either way.

What subscribers to Apple TV+ get is access to Apple’s library of new and exclusive content which, at the time of writing, consists of 17 titles: 14 TV shows and three films. Meanwhile, Disney+ boasts 350 TV shows and 500 films. Apple TV+ doesn’t so much lose the numbers game as fail to turn up for it.

Apple’s original content is at least good. For All Mankind and Little American are particularly strong, but the Rotten Tomatoes rating system suggests that practically everything on Apple TV+ is broadly liked. That said, it feels as though nothing on the service has really grabbed public attention in the way of, say, Netflix’s Stranger Things, Amazon Prime Video’s The Boys or even Disney+’s The Mandalorian.

It is still early days, of course, and perhaps Apple TV+ doesn’t yet have enough subscribers for one of its shows to really penetrate the social consciousness. However, with anyone who bought an Apple device since September 2019 being given a free 12-month subscription and everyone else being offered a seven-day trial, there has been ample opportunity for people to check out Apple’s offering.

That Apple has spent a vast amount of money on its original shows and films is obvious from the names involved: Jennifer Aniston, Reese Witherspoon and Steve Carell in The Morning Show; an Oprah Winfrey talk show; a Steven Spielberg anthology series. None of this is cheap.

But It's also clear that Apple has invested plenty of cash in the production and distribution of its content, because the picture and sound quality is superb.

It’s particularly noticeable when watching in 4K HDR, in which all content is available (both HDR10 and Dolby Vision are supported). While it’s impossible to compare the original content of different streaming services - it's all different, after all - we can’t recall a better presentation from Netflix or Amazon.

Play Mythic Quest: Raven’s Banquet and there's fabulous crispness and clarity to the image. Every character is impeccably drawn and detailed and the picture pops from the screen. Colours are rich and vibrant but still natural, and there’s plenty of punch to proceedings. It’s easy to forget that you’re watching a stream and not a disc.

There’s plenty of punch and detail to the audio, too, but playing For All Mankind it’s the placement of the Dolby Atmos effects that we’re most impressed with. While not everyone will benefit, those who have invested big money in a proper Atmos system will find the sonic experience at least as cinematic as that of many blockbuster movies. Those simply using a soundbar will still find the delivery to be clear and direct.

While most streaming services bolster their original content with big TV shows and movies from third parties, Apple is relying solely on its originals. And while practically all of the content is worth watching, both in terms of entertainment value and AV quality, there’s simply not enough of it.

Apple TV Plus is free for many people and relatively cheap for those who pay, so there's little to no barrier to dipping in if you spot a new film or TV show that takes your fancy, but it still feels as though the service is currently missing a real must-watch show. We have little doubt that will come at some point, but in the meantime Apple TV+ is much more of a curio than an essential subscription.