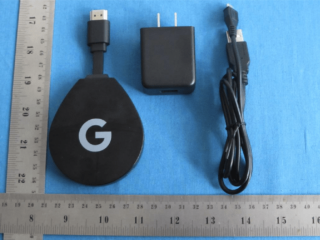 The FCC listing – spotted by Ausdroid – is accompanied by several images showing a Chromecast-like HDMI dongle with the unmistakable Google logo printed across the front.

The user manual suggests the dongle supports 4K resolution, is powered by an Amilogic S905X processor and has 2GB of RAM, 8GB on-board storage and a HDMI 2.0A output with HDCP 2.2 certification. On the connectivity side, there’s Bluetooth 4 and dual-band Wi-Fi 802.11 a/b/g/n/ac - although we can’t spot an Ethernet socket.

There’s also a remote, which looks similar to one bundled with the Amazon Fire devices and features a Google Assistant button for that all-important Amazon Fire Stick/Alexa-rivalling voice control.

It looks like it will run the latest Android 8.0 Oreo software and TV UI, too.

Google has, of course, been no stranger to 4K video streaming since the introduction of its Chromecast Ultra in 2016. But a 4K player with its own interface and operating system would no doubt make a fine replacement to the now-obsolete Nexus player, and one that’d sit nicely alongside the brand’s existing Chromecast offerings.

Let’s hope we get confirmation, and further details, at next month’s Google I/O, then…