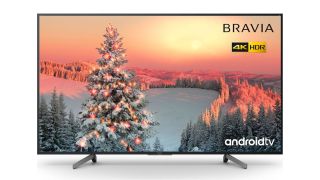 There's nothing as cinematic as a genuinely huge TV, but going really big is often prohibitively expensive or involves buying from a brand with a less than stellar reputation.

Not so this Black Friday!

Sony KD-75XG8096 75-inch 4K TV for £1299 at Currys
This massive Sony screen had already seen some healthy discounting since launch and has just dropped a further £200 for Black Friday. 4K, HDR and the Android TV operating system make it a great choice for those looking to go big on a bit of a budget.View Deal

Clearly this isn't one of Sony's flagship OLEDs. Instead your comparatively modest outlay buys you an LCD model with a direct LED backlight and pared-down processor. You have to do without Dolby Vision, too, but HDR10 and HLG are supported.

Importantly, you're getting a lot of Sony screen for your money, and the Android operating system gives you access to all of the biggest apps. The set also has YouView, which is a great platform for consuming BBC, ITV, Channel 4 and Channel 5 content, whether live or on catch-up.