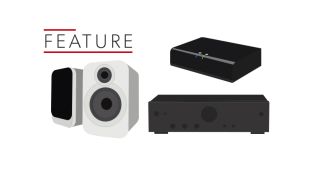 The key here is Arcam’s splendid rPlay. It's a compact streamer that looks a little like a wireless router, and can turn even the most traditional system into a plug-and-play-almost-anything network streaming set-up. Here's how it's possible to build a flexible and high-performing do-it-all system for less than a grand.

The success of this system is due, in the first instance, to the DTS PlayFi streaming platform built into the rPlay. It unlocks the ability to stream music wirelessly from smartphones, tablets or laptops to speakers throughout the home, and from a range of music sources.

Download the dedicated DTS PlayFi app (there’s no physical remote) and you’ll be able to stream services on up to eight rPlay devices connected to the same network simultaneously. Did someone say multi-room?

That's asking some multitasking of the app - but while flaky software rivals internet drop-outs and video buffering in our list of pet hates, the PlayFi is consistently stable as well as intuitive to use.

It isn’t fazed by dashing through our NAS drive’s lengthy library, and in a hard week of app use we aren’t subject to dropouts or meltdowns.

The rPlay supports PCM files up to 24bit/192kHz - the DTS PlayFi app has a ‘Critical Listening’ mode that allows native streaming up to 192kHz without downsampling. In typical Arcam fashion, careful consideration has been taken with the internal architecture of the box itself to reduce noise and distortion. The four-layer circuit board reduces interference between components, and the use of multiple low-noise power supplies aims to deliver the cleanest signal to the output stage.

Connecting an rPlay to an amplifier or external DAC can happen either by one of its two line-level outputs or via its single digital coaxial output.

Our choice of amplifier for connection to the rPlay is Onkyo’s multi-Award-winning A-9010.

On the surface it looks pretty ordinary. Its appearance is neat, in a wholly functional way - it lacks anything by way of overt design flourishes. There are tone controls, a decent array of line-level inputs, a moving-magnet phono stage and a headphone output.

It’s clear pretty much all the creative effort has gone on optimising the electronics. Start listening and it doesn’t take long to realise Onkyo's engineers have managed to deliver something special.

We’ve yet to hear another budget stereo amplifier that sounds so accomplished and enjoyable.

StreamYellow Light by Of Monsters and Men and be swept away by the amplifier’s open and energetic presentation. It sounds cohesive and well balanced, delivering a sense of drive and attack well beyond what we expect from a product of this type and cost.

Add the Onkyo’s superb timing and strong dynamic expression and you have an amplifier that makes listening to music fun. That’s a rare quality at any price.

And we feel it finds a great match in Q Acoustics’ 3020 standmount speakers.

The 3020s comprise of a cabinet made mainly from 15mm MDF panels but with a double-layer 30mm top plate and similarly layered 24mm front baffle. This structure is then braced in specific places to control resonances and help with stiffness.

All this work pays off in an enclosure that feels immensely solid and provides a good, rigid foundation for the drive units to work from.

The speaker terminals – hidden under the base panel in the 2000 series – have been moved to a more conventional position on the back. This not only makes the terminals more accessible, but also improves structural rigidity. The 3020s are single-wire only. Though ostensibly a retrograde step, at this end of the market it’s much better to have a single length of decent cable than two sets of inferior alternatives.

As for drivers, the 12.5cm mid/bass unit’s cone material has changed from a paper/mica mix in the 2000 series to one combineing paper and aramid fibre - more commonly known as Kevlar. This strengthens the paper cone and makes its behaviour more predictable, leading to what Q Acoustics describes as a “more natural tonality”.

The 25mm tweeter uses a diaphragm that aims to combine the best qualities of ring radiator and dome designs. The aim is to deliver highs with low distortion and wide dispersion. Its motor system uses a dual ferrite magnet, and the whole assembly is decoupled from the main cabinet structure by butyl rubber to isolate it from cabinet-borne vibrations.​

Over the years, Q Acoustics has developed a specific sonic character, refined and subtle but with enough by way of dynamic punch and rhythm drive to satisfy. And so it is with the 3020s.

Their innate refinement means any harshness or edge in the partnering electronics isn’t emphasised – ideal if you’re using the rPlay to run less-than-studio-quality Spotify streams – though they’re also well capable of digging out a quality performance from something of higher resolution.

It all makes for an energetic, exciting performance without sacrificing the kind of maturity you’d expect from a system costing four-fifths of a grand. Expert timing and impressive dynamic range keeps music interesting as well as entertaining, with plenty of insight for those deep listens as well the power to party.

So many entry-level products seem keen to over-egg certain aspects of sonic performance - as if attempting to trick the listener into thinking they’re getting more bang for their buck - but these three components share a refreshing sense of transparency that will serve you well whatever upgrades you end up making in the future.

For a versatile and entertaining system belying its budget status, you're hard-pushed to better this particular trio.

Rega has long trumped its rivals in terms of performance when it comes to entry-level and mid-range decks, and thanks to an eye-opening amount of detail, rhythmic agility and probing sense of expression, the Planar 1 is unquestionably king of this sector.

The word ‘legendary’ is barely overstatement for the 6000 series, and the CD6006 is without question a superior disc player to its forbearers. It majors in dynamics and attack without getting overexcited, delivering its performance with warm confidence.