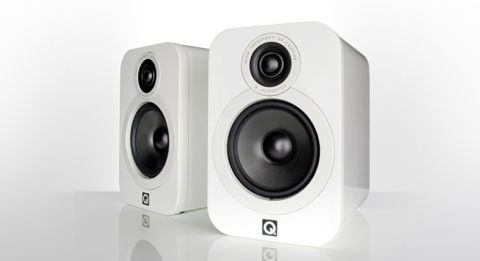 Another outstanding budget standmounter from Q Acoustics. The 3020s deliver a fabulous sound for the money

The success of the Q Acoustics brand has been astonishing. The company started back in 2006 and right from the start has produced sensibly priced, class-leading speakers. And guess what? It’s only gone and done it again.

The 3020 is part of the new 3000 Series. While the multiple Award-winning 2000 range continues for now, it’s hard to see demand remaining once word gets out about these new products. The series includes two standmounters, a floorstander, centre and subwoofer.

These 3020s are the larger of the standmounting options. There’s a familiar look about these speakers, but otherwise almost everything else is new.

Many of the lessons learned in the design of the premium-priced Concept 20 and 40 speakers have been applied here. This is particularly evident in the cabinet. While the price has taken the sandwich construction used in the Concepts off the menu, Q Acoustics has still produced an impressively well-engineered box.

The 3020’s cabinet is made mainly of 15mm MDF panels but with a double-layer 30mm top plate and similarly layered 24mm front baffle. This structure is then braced in specific places to control resonances and help with stiffness.

All this work pays off in an enclosure that feels immensely solid and provides a good, rigid foundation for the drive units to work from. The speaker terminals – hidden under the base panel in the 2000 series – have been moved to a more conventional position on the back.

This not only makes the terminals more accessible, but also improves structural rigidity. A less obvious benefit is that the cabinet depth is significantly reduced from the 2020is, but without losing much internal volume. Height and width stay the same.

The 3020s are single-wire only, losing the biwire arrangement of the 2020is. Though apparently a retrograde step, at this end of the market it’s much better to have a single length of decent cable than two sets of inferior alternatives.

These speakers are available in five finishes. Matt Graphite and American Walnut are standard options, but for an extra £60 you can have either white or black lacquered gloss or an interesting leather option.

Our gloss white review sample is finished beautifully, and made with an attention to detail that few competitors come close to. Q Acoustics’ work hasn’t stopped there. Both drive units are new too. The 12.5cm mid/bass unit’s cone material has changed from a paper/mica mix to one that combines paper and aramid fibre, more commonly known as Kevlar.

This strengthens the paper cone and makes its behaviour more predictable, leading to what Q Acoustics describe as a ‘more natural tonality’. The new 25mm tweeter is unusual. It uses a diaphragm that aims to combine the best qualities of ring radiator and dome designs.

The aim here is to deliver highs with low distortion and wide dispersion. The tweeter’s motor system uses a dual ferrite magnet, and the whole assembly is decoupled from the main cabinet structure by butyl rubber. The idea is to isolate it from the vibrations of the cabinet and produce a purer sound.

These drive units are linked with a revised crossover that features higher grade components than found in the 2000 series, designed with a view to lowering distortion and minimising any phase issues at the crossover frequency.

These speakers are just as likely to find themselves partnering a little micro system such as Denon’s evergreen DM39 as they are in a hi-fi separates set-up. They need to be relatively easy to drive and forgiving sonically, and that’s exactly what they are.

Over the years, Q Acoustics has developed a specific sonic character, refined and subtle but with enough in the way of dynamic punch and rhythm drive to satisfy. And so it is with the 3020s. Their innate refinement means that any harshness or edge in the partnering electronics isn’t emphasised.

They aren’t overly fussy about shortcomings in source material either, so anyone with low-bit rate MP3s still has a chance of getting a decent level of enjoyment out of them. Partner the 3020s with high quality hi-fi separates and good recordings, and they have the transparency to make the most of things.

A typical partnering system would be something like the Marantz 6005 CD and amp (about £300 a pop), but such are the 3020’s talents that it would be quite happy at the end of an Audiolab 8200CD and Arcam A19 pairing – impressive considering the speaker’s pricetag.

Of course, you’ll need to take care in set-up. While these speakers will perform well on wall brackets, we recommend using good, solid stands if you can.

Something like Atacama’s Moseco 6 (£120) would be good, with Q Acoustics Concept stand (£200) being even better. Either option might seem quite pricey considering the cost of the speakers, but we think the 3020s’ potential fully justifies that outlay.

The 3020s aren’t particularly picky about positioning either. We preferred them around 15cm from the back wall, but they sounded pretty balanced tonally even well out into the room. The tweeter’s dispersion characteristics mean that exact toe-in angle isn’t critical; they just render a wide and cohesive stereo image without much effort.

Play Prokofiev’s Romeo and Juliet and the 3020s deliver a wide, deep soundstage populated by nicely layered and precisely focused instruments. We’re impressed by the dynamics on offer, as the 3020s deliver the music’s crescendos with confidence, while rendering low-level subtleties with a skill quite outside the scope of most rivals.

We listen to Bruce Springsteen’s Terry’s Song and love the way these speakers handle the genuine emotion in Springsteen’s vocals as he mourns the loss of his friend. The tweeter does its job well here, delivering all the bite we expect without overplaying the recording’s occasional hard edge.

Move up a gear to Radio Nowhere and the Qs show they can rock too. They motor along with this track, delivering plenty in the way of drive, dynamics and attack.

We listen to a range of music, starting with the sparsely produced Coexist from The xx and Bjork’s energetic Post, through to Vivaldi’s Four Seasons, and these little gems never fail to please. For their size they deliver a decent dose of low-end punch, and are loud enough for most situations.

Partner the Q Acoustics 3020 speakers with a bit of care and you’ll get a quality of sound that’s well beyond the typical expectations of a sub-£300 speaker.

Fabulous value? Without a doubt.