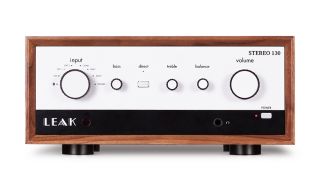 The return of a leak has never been cause for celebration. That is, until now. Because (drumroll please) legendary British hi-fi brand Leak is back! After a four-decade hiatus, Leak has been resurrected to bring retro style, classic audio engineering and cutting-edge technology to today’s music lovers.

The first Leak product out of the gate in 40 years is the Stereo 130 integrated amplifier, a modern-retro masterpiece that draws on the company’s rich British heritage and reinstates Leak as a veritable tour de force in the hi-fi world.

Founded by Harold Joseph Leak in 1934, Leak was a British hi-fi trailblazer during the mid-20th century.

Anyone familiar with its Point One valve amplifier range from 1945 – notable for being the first amplifier to deliver 0.1 per cent total harmonic distortion (and named as such) – or its Sandwich speakers – which heralded true-piston cone action by sandwiching polystyrene foam between outer skins of stiff aluminium foil – will be privy to the company’s appetite for innovative design.

Such was Leak’s engineering excellence that its 1957 Trough-Line is still considered one of the greatest FM tuners ever made.

The all-new Stereo 130 is a descendant of another Leak classic, the Stereo 30 integrated amplifier, which arrived in 1963 as the first commercially available all-transistor amplifier. It spearheaded the use of transformerless transistor output stages over the then-standard transformer-coupled design, paving the way for future solid-state amps.

The Stereo 130’s aesthetic resemblance, which appeals to the ‘retro is the new modern’ sentiment with its real-wood enclosure and invitingly tactile front panel, isn’t the only nod to its ancestor. The engineering behind its circuit design embodies the Stereo 30’s pioneering spirit, too, utilising the latest techniques and technologies to bring this classic transistor amp design bang up to date.

With its connectivity also benefiting from such modernisation, the Stereo 130 is destined to be the beating heart of any high-performance audio system – to deliver vinyl and CDs, Bluetooth-streamed and USB-stored music, through all manner of speakers and, thanks to a dedicated headphone amp stage, headphones.

The Stereo 130 also recognises the unrivalled convenience of streaming music from a phone, tablet or music player over Bluetooth, supporting the high-quality aptX codec in addition to AAC and SBC.

Quite simply, there is nothing the Leak can't happily turn its hand to. But for all its versatility, this is an amplifier that puts the music first. Whatever the source, its virtuosic performance is consistently engaging: foot-tappingly lively yet maturely refined, richly detailed and fluidly dynamic.

The Stereo 130’s innate musicality is hardly surprising given the hi-fi handiwork involved. At its core is a Class AB power amp that draws on many decades of amplifier design experience. And in tasking the high-performance, ultra-low-noise ES9018K2M Sabre32 Reference DAC chip to handle digital-to-analogue conversion, Leak has guaranteed exceptional digital music playback.

To ensure utmost detail and expression from every music source, the company’s expert engineers have passionately laboured over both the digital and analogue architecture, implementing specially devised circuitry, protective shields in the preamp section, and independent low-noise power supplies for all critical stages.

What’s more, performance can be tailored to suit the varying characteristics of different analogue and digital sources courtesy of bass and treble tone controls also passed down from the original Stereo 30. That adaptability makes the Stereo 130 a perfect partner for all manner of contemporary loudspeakers – not least for the What Hi-Fi? five-star-rated Wharfedale Linton speakers with which it shares a classic 1960s-inspired design and special sonic synergy.

Here, vintage aesthetic, contemporary features and state-of-the-art technical proficiency go hand in hand to herald a new and unique addition to the midrange amplifier market and the beginning of what’s bound to be an exciting comeback by Leak.

The Leak Stereo 130 is available from July, with or without a real-wood walnut enclosure for £799 and £699 respectively. It arrives alongside the option of a matching CD transport, the Leak CDT, extending the classic Leak aesthetic to high-performance CD playback.