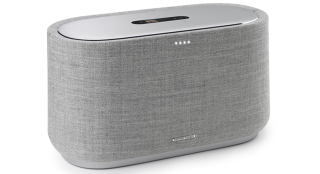 Harman Kardon has unveiled a new smart speaker with Google Assistant built in. Called Citation 500, the speaker is apparently "inspired by the timelessness and attention to detail of Nordic design".

In real terms, that translates to wool fabric around the outside, and a smooth top fitted with LCD touch controls for playback. The speaker itself has a stereo configuration, with 200 watts of power behind your music.

Since it's a Google Assistant speaker, it comes with Chromecast as well - so you can stream music from compatible apps such as Tidal to the speaker up to 24bit/96kHz resolution. Bluetooth is available for all other applications.

Despite Amazon and Microsoft recently rolling out the long-awaited collaboration between Alexa and Cortana, those in the Android ecosystem will only consider more Google Assistant speakers a good thing. Siri, meanwhile, remains stuck solely in the HomePod or accessible via an iPhone in Sonos' Beam soundbar.