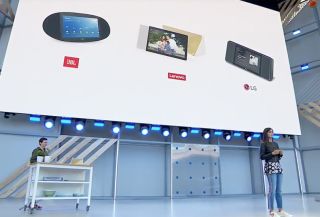 Google Smart Displays combine a voice-assistant smart speaker with the bonus of a screen - and, crucially, access to YouTube, including live TV shows.

Google has confirmed the first devices will go on sale in July, with manufacturers including JBL, Lenovo, LG and Sony set to be some of the first out of the blocks with devices to take on the Amazon Echo Spot and Echo Show.

The devices will have YouTube TV, which includes live TV programmes (in the US at least), as well as all the usual YouTube content. This sets the devices apart from Amazon's offerings. As well as YouTube, the usual suite of voice-activated Google Assistant features is at your disposal.

And there will be some Google Assistant upgrades very soon. If you're bored of Google's voice already, you may be glad to hear you'll soon be able to choose from six celebrity voices, starting with musician John Legend.

If you're more interested in simply getting more out of the assistant, then Google's Duplex technology should pique your interest. This ingenious tech allows the Google Assistant to make calls on your behalf, allowing, as demonstrated by Google, the assistant to call a restaurant, interact with the person on the other end, and then make a booking.

Amazed? You should be. The Google Duplex technology is currently in development so don't expect it to land on your phone any time soon, but it shows the potential power of voice assistants.