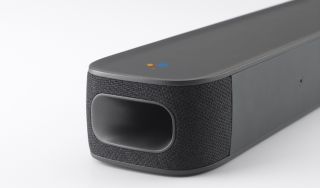 Got a dumb TV? (By which we mean one that doesn’t have smart apps, like Netflix, built-in.) If the answer is ‘yes’, the JBL Link Bar soundbar may be one to keep your eye out for.

Ahead of Google’s annual I/O developer conference, which kicks off later today, Google has unveiled a smart soundbar resulting from its collaboration with JBL.

Essentially, the JBL Link performs soundbar duties just like any other - but it has additional, more unusual benefits.

Firstly, the soundbar also doubles as a smart speaker thanks to built-in Google Assistant voice control. That means you can simply ask it to, say, open YouTube or select a TV channel; you can connect it to another Assistant-powered smart speaker (like the Google Home), or speakers with Chromecast Audio, for multi-room sound.

Secondly, it can turn any TV ‘smart’ by gifting it apps provided by the latest Android TV platform.

The JBL Link Bar comes with three 4K/HDR-supporting HDMI inputs and an ARC HDMI output to connect your sources, such as a Blu-ray player or games console. There's also optical and 3.5mm inputs, an Ethernet socket providing an alternative to a wi-fi connection, and a subwoofer pairing button for connecting a yet-to-be-announced JBL sub.

The JBL Link Bar will be available later this year, with further details, including pricing, to be announced nearer the time.

The Link Bar will be the latest addition to Link line, which JBL launched at IFA last year with a series of smart speakers, and has since expanded with the Link View display-toting smart speaker. However, with Google stating this is “the first in a series of hybrid devices that delivers a full Assistant speaker and Android TV experience”, it might not unique by the time it hit shelves - especially if Sonos is readying a smart soundbar.