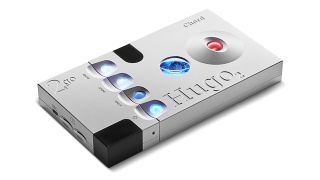 It’s been a little over four years since Chord Electronics launched a dedicated Poly streamer for its portable Mojo DAC, and in that time we’ve naturally been anticipating the arrival of a similar streaming module for the company’s also-portable but higher-end Hugo model. Well, today’s the day the suspense ends.

Chord has announced the 2go streaming accessory (£995) for the Hugo 2, gifting it hi-res streaming abilities over wi-fi (2.4GHz) or Ethernet (Gigabit). It’s DLNA-compliant, allowing users to play networked files from, say, their NAS device. And there’s audio interfacing for Tidal, Qobuz and internet radio playback, with Spotify (and others) earmarked for the future. 2go also supports AirPlay.

In addition to online streaming, Bluetooth is also on board. And there are two 2TB-capable SD card slots for digital storage and playback so that the device can also act as a music server using the MPD platform.

Providing the Hugo 2 and 2go are charged, all forms of playback are possible through battery power alone. Could this turn out to be the ultimate portable streaming set-up? Considering the Mojo/Poly's success, we wouldn't bet against it.

The 2go’s proprietary streaming circuit is based around a powerful triple-core audio processor. And as every one of the 2go’s input interfaces is always on, switching between inputs is as easy as hitting ‘play’ on the chosen playback app - you don’t need to manually select it.

Set-up is via Chord Electronics’ Gofigure configuration app which, by the way, is being upgraded for Android users early this year for simplified operation as well as new wi-fi and Bluetooth LE configuration options.

While the company’s Poly is solely for use as a partner to the Mojo, the 2go has been designed to also work as a streamer/server with other DACs or digital-input devices. For this, you’ll need to also buy and attach to the 2go the also-new 2yu module (£449), which provides USB, optical, coaxial and BNC digital outputs so that the duo can connect to any DAC/digital device with any of those types of inputs.

The 2go is available now and will make its world debut at CanJam New York this weekend, with its European debut following at the Bristol Hi-Fi Show next weekend (21-23rd Feb). The 2u, meanwhile, is expected in the coming weeks.