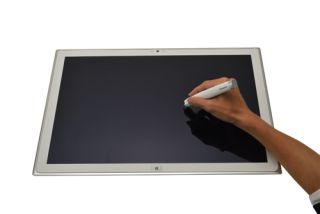 Panasonic has unveiled a 20in Ultra HD 4K tablet during the opening Keynote Speech at CES 2013 earlier today.

There's an HD 720p camera on board as well, and the tablet comes equipped with Bluetooth 4.0, USB and SD memory card slots, and has a capacity of 4GB.

The tablet also comes with a digital stylus, named the Anoto Live pen, which claims to have a resolution as high as the tablet itself.

Panasonic is aiming for this tablet to be used in a business and professional capacity, with editing and fine-tuning offical documents and proofs being focussed during the demonstration.

The digital pen can be used to add notes straight on to the tablet screen, and enables natural handwriting.

Based on the Windows 8 operating system, the tablet's applications and multi-touch interface aims to be 'a more realistic and intuitive operating environment than paper or a display.'

The tablet will be available later in the year - we'll bring you details regarding the date and pricing when released.

The tablet will be on display at the Panasonic booth at CES 2013, along with the newly announced 56in Ultra HD 4K OLED TV.

Panasonic announced new Ultra HD TVs at its press conference yesterday, as well as a host of other new TVs, headphones and more for 2013.

Catch up on everything new at the CES 2013 on our constantly updated CES blog.