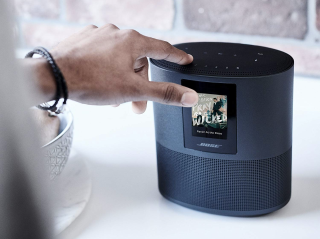 Bose Home Speaker 300 $199 at Amazon
This diminutive Bose home speaker promises 360-degree sound and boasts Alexa and Google Assistant smarts baked right in. You'll get AirPlay 2 support alongside Bluetooth and wifi, meaning if it's on your phone, you can play it on your speaker, too. It can be controlled by voice, the Bose Music app, or via the six, one-touch presets on the top of the speaker. A tidy, $60 saving on a compact smart speaker.
View Deal

Bose Home Speaker 500 $299 at Amazon
A stereo smart speaker with an LCD display to present whatever track is playing, plus an eight-mic array so that your virtual assistant is always on call. The 500 is the larger of Bose's Home series and promises room-filling sound plus deep bass. Both Google Assistant and Alexa are built in, and while we haven't had one in for a thorough appraisal, at this reduced price it's a solid bargain on a Bose smart speaker.

The silver and black options in both models are discounted, and each comes with Alexa and Google Assistant built in. You'll also get wifi and Bluetooth alongside Apple's AirPlay 2, which means pretty much any streaming service you could wish for is at your disposal. There's a 3.5mm aux jack, and you can control music by either your voice, the Bose Music app or the six, one-touch presets on the top of the speaker.

In the 300, you get a six-microphone array so that Alexa can pick up your every command, where the 500 ups the ante further to an eight-mic arrangement.

Both Bose speakers are from the same family, so can be used together for a multi-room setup – at a serious discount.

If it's a top deal on a voice or app-controlled speaker bearing the trusted Bose name you want, you may just have found it.

The best speaker deals ahead of Black Friday

8 tips to get the best Black Friday deals