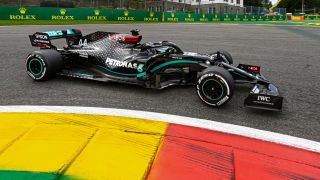 Those in the UK will need to subscribe to Sky to watch the Monza grand prix live. F1 fans in the US can stream every race live for just $79.99 per year via F1 TV Pro (don't forget, you'll need a VPN to access your account when outside of the US).

Ferrari continue to have a tough time at their home grand prix. Sebastian Vettel crashed out of qualifying in Q1 and will start the race a miserable 17th, while Charles Leclerc could only manage 13th. Today will be the first time since 1984 that Ferrari are missing from the top 10 of an Italian grand prix start. There was one ray of sunshine for Ferrari, however. Formula 2 Ferrari driver Mick Schumacher, son of seven times' champion Michael, won from seventh on the grid in the F2 feature race at Monza.

So onto the big race today – the Italian GP at 2.10pm. With Hamilton 47 points clear at the top of the drivers standings and looking to tighten his grip on the title, it's now or never for Bottas and Verstappen. Can they stop Hamilton winning his 90th grand prix today?

"When your team-mate's on pole and you're both so much quicker than everyone else, it's going to be a really tough race," said 2007 F1 champion Jenson Button. "[Bottas] has to try something on Lap One, otherwise I don't know how he's going to do it."

In other news, Claire Williams and the Williams family have announced they are to step down from Williams F1, the  team founded by Sir Frank Williams more than 40 years ago. Williams achieved huge success in the 1980s and 1990s, winning titles with Nigel Mansell and Damon Hill. But having finished bottom of the championship two years in a row, they were bought by US investment group Dorilton Capital last month. If you've not watched this riveting documentary charting Sir Frank's maverick rise to F1 legend status, now would be an excellent time to do so.

We'll look at the TV and live stream options for UK and USA-based F1 fans below, but even after spending all that money on a subscription you're still not going to be able to watch the Grand Prix from another country. The service will know your location based on your IP address, and will automatically block your access.

Anywhere else and you might want to get yourself a VPN instead. A VPN (Virtual Private Network) creates a private connection between your device and the internet, such that the servers and services you’re accessing aren’t aware of what you’re doing. All the information passing back and forth is entirely encrypted.

Watch the Italian Grand Prix live in the UK

That comes bundled in with all the other sports channels as part of the £18 per month Sky Sports pack or you can get Sky Sports F1 on its own for £10 per month but on a rolling contract.

Watch the Italian Grand Prix live in the USA

ESPN will carry live coverage of every session to subscribing US fans. Practice sessions will be available on ESPN2, with qualifying and the race broadcast on the main ESPN channel.

You can get instant access to ESPN and some good deals here.

Live streaming is available via the ESPN App, which is available on Android phones and tablets, iPhones, iPads, Fire Tablets, Apple TV, Android TV, Chromecast, Fire TV, and Roku. You'll need to sign up to ESPN first, though.