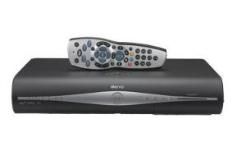 Match it with the right sound and vision kit, and your TV watching will be transformed

Sky+ was nothing short of a revolution when it first appeared, partnering foolproof usability with brilliant functionality. Next came Sky HD – and the same slick system was brought in to the high definition domain, allowing you to pause, rewind and record brilliant-looking HD content. And it remains the benchmark.

This year saw not one but two price cuts for the Sky+ HD box. The existing deal sees the box drop to just £99, though the £10 monthly charge for the HD Mix of programmes remains.

But it's not just the price that's changed, this latest box is made by Pace rather than Thomson, who made the previous HD set-top box. Round the back there is now a digital coaxial output as well as a digital optical for sending audio but there's no component video, so it's just HDMI for HD (there's a Scart, too).

While we don't discern a visible or audible difference in quality, we do find the interface faster, skipping between channels quicker than before. It's also deathly quiet – unlike the old box – which we attribute to the increase in air vents at the back that stop the cooling fan kicking in.

Provided the new channels go live as planned, there should be some 26 channels of HD content available in October which, together with the brilliance of this new box, make this the high-definition source of choice.